Northern Pakistan Under Water Once Again 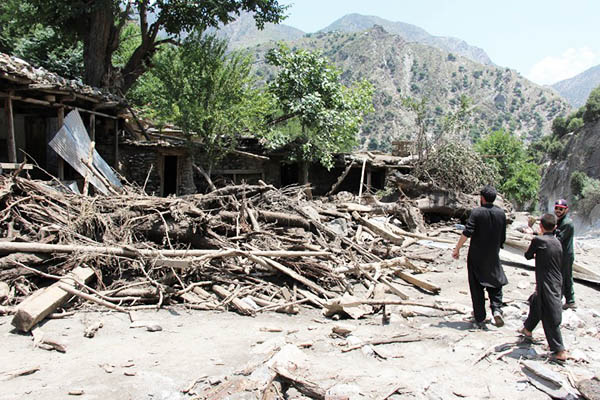 Overnight flash floods killed at least 43 people in northern Pakistan, the majority in a remote village that did not receive an evacuation warning before the waters hit washing away most of the settlement, officials said Sunday.

The heavy monsoon rains began late Saturday and were concentrated mainly in Khyber-Pakhtunkhwa province, which has been badly affected by flooding in recent years that some scientists have linked to climate change.

The worst hit district was Chitral, on the country’s northwest border with Afghanistan, where the floodwaters killed 41 people in the village of Ursoon, which is home to some 100 families, said district mayor Maghfirat Shah.

Eighty-two homes in the village were affected by the waters, a rescue services statement said, with some of them swept away, along with a mosque and an army post. “Sixteen of the dead were offering prayers in the mosque when it was swept away by the flood,” said Latifur Rehman, a spokesman for the provincial disaster management authority.

At least eight of the victims were soldiers, and another eight bodies were swept over the border into Afghanistan, senior local official Osama Waraich said.

Rehman said a military-led rescue and relief operation was now underway, with helicopters being used to reach the affected people and provide them with tents, food and medical aid.

Falah-i-Insaniat Foundation, the charitable wing of the banned Lashkar-e-Taiba militant group, were among the first at the scene providing relief. An AFP reporter in Ursoon said survivors who had lost their homes were waiting for aid under open skies surrounded by mud and debris where their village once stood.

Nearby villages had received flood warnings from the local authorities, but Ursoon was not alerted in time, the reporter said.

Separately, two Chinese engineers were killed and five Pakistani workers injured when the heavy rains caused the roof of a construction site to collapse at Tarbela Dam, also in Khyber-Pakhtunkhwa province, Rehman said.

Heavy rains and flash flood claim many victims each year, with poorly built homes across the country, particularly in rural areas, susceptible to collapse during the annual spring and monsoon rains in July-August. In April rains and landslides killed 127 people in Khyber-Pakhtunkhwa, the Gilgit-Baltistan region and Pakistan-administered Kashmir.

During the rainy season last summer, torrential downpours and flooding killed 81 people and affected almost 300,000 across the country. The worst flooding in recent times occurred in 2010 and covered almost a fifth of the country’s total land mass. Nearly 2,000 people were killed, 20 million affected and huge tracts of prime farmland destroyed.

Rapid deforestation brought about by decades of illegal logging in the country’s north and the growth of farming along the river Indus in the south is believed by experts to have exacerbated the effects of the annual floods.

Energy-starved Pakistan relies on a multitude of dams and barrages to prevent Himalayan rivers from flooding and help meet its power needs, but some academics believe the slowing of rivers due to the structures mean that silt accumulates, decreasing their capacity. A research paper commissioned by conservation group WWF and published in 2000 looked at various countries, and warned of similar consequences. It noted the drainage of wetlands as well as deforestation associated with dams led to a loss of natural “sponges” to absorb floodwaters during rainy season.