Home Culture ‘Not a Nice Man at All’ 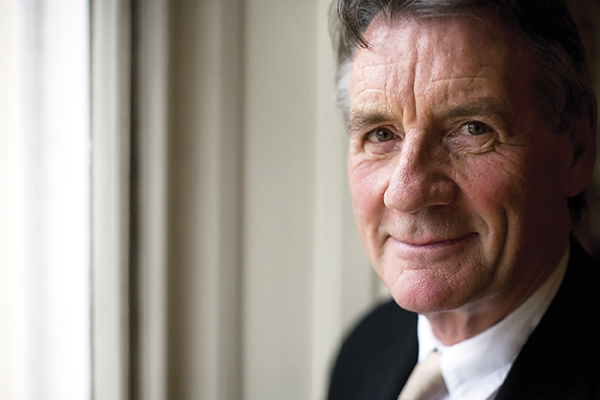 Actor, comic, presenter, and writer, Michael Palin has been there, done that. His global influence started with Monty Python’s Flying Circus and continued with his travel documentaries, so much so that the ‘Palin Effect’ turned vistas he visited into tourist hotspots. True to form, he describes himself on his website as “not a nice man at all … an ill-tempered lout who sits in bed all day eating fudge” and as someone whose favorite food includes “vanilla ice cream, rosti potatoes and spam. Oh, and camel.” Palin, 74, is visiting Pakistan again, this time to speak at LLF 2017. We spoke with the English icon recently. Excerpts:

You’ve gone from the violently hilarious Monty Python to travel documentaries. Talk us through this transition.

I’ve always been freelance. The pattern of my working life has been very much a matter of luck, of being in the right place at the right time; meeting someone who gave me inspiration. When I was growing up in Sheffield, geography was my favorite subject. I dreamed of adventure in places I was sure I would never live to see. I also had a vivid imagination and an ability to make people laugh. In 1987, after I had finished work on the film A Fish Called Wanda, a phone call came from a man at the BBC wanting me to front a new series called Around the World in Eighty Days. From the way he described it, it sounded the perfect combination of adventure and comedy. So I said, yes. It led on to seven more travel series.

Were you always interested in comedy or is there a serious Michael Palin buried somewhere beneath it all?

I don’t think comedy and seriousness are incompatible. Comedy is very often a way of confronting the darkest things in life. I love observing human behavior. Others may see desperation and despair, but I have a highly developed sense of the ridiculous which keeps me from deepest gloom. Having said that, I take the opportunities to pursue my insatiable curiosity very seriously. I’ve made documentaries about artists and I’ve written novels, which I hope will be taken as seriously as they are intended. But if I have a fatal flaw, it’s excessive flippancy.

Monty Python quickly became a household name synonymous with comedy; how hard was it to follow up the legendary show with fresh material in your subsequent shows?

The Monty Python television series ran its natural course and once people wanted to get out and do other things there was no undue pressure to stay on board. Fortunately the films—Holy Grail, Life of Brian, Meaning of Life—came along and provided a continued outlet for Python humor but on a timescale that allowed all of us a chance to try other work. Terry Jones and myself felt that it was important to avoid doing something that would look like Son of Python, so we came up with a new genre of comedy in the half-hour series called Ripping Yarns. In some ways I liked being free of Python as I was able to pursue some straight acting opportunities which proved very useful later on.

About your passion for art, who are some of the lesser known artists you find enthralling?

I grew up in a household with very few pictures on the walls and at schools where art and learning about art was considered something effete and not terribly important, like acting. Much later, visiting the galleries of London, the Tate, the National Gallery, and particularly the brilliantly intimate Courtauld collection, I found myself making up for lost time. My eyes were opened to the power of painting. The drama that could be encapsulated on canvas using line and color, the sheer amount one painting could say and the way in which an artist could, with a few brushstrokes, change the way you looked at the world. In the 1990s, I was fortunate to be asked to work with a team from BBC Scotland on several documentaries about lesser known artists. The Danish artist Vilhelm Hammershøi is one of my favorites, as is a Scottish painter called Anne Redpath, and a hugely accomplished, largely unknown Baroque artist called Artemisia Gentileschi, a contemporary of Caravaggio.

You’ve expressed your strong support for the BBC in the past. What role, if any, should national broadcasting channels have in the fostering of culture in a given populace?

I was brought up on BBC radio and television programs. I learned much from them, and listening and watching together was an important part of our family’s shared experience. My sister worked for the BBC and my first job after leaving Oxford was as a writer for one of David Frost’s BBC programs. Monty Python would never have been let loose by any broadcaster other than the BBC, and Around the World in Eighty Days was the brainchild of experienced BBC documentary makers. So I have a lot to thank the BBC for. As with any big organization we have had a love-hate relationship, but I always valued the artistic and creative freedom that the BBC offered. Things have moved on so fast now that debates over national television channels seem almost irrelevant, but I think it important that there is a source of production and information that does not depend on a purely commercial market. Nor should a national broadcaster ever become a mouthpiece of the government. In my opinion, the BBC, especially the World Service, still has an important role to play. It is still one of the things I most admire about my country.