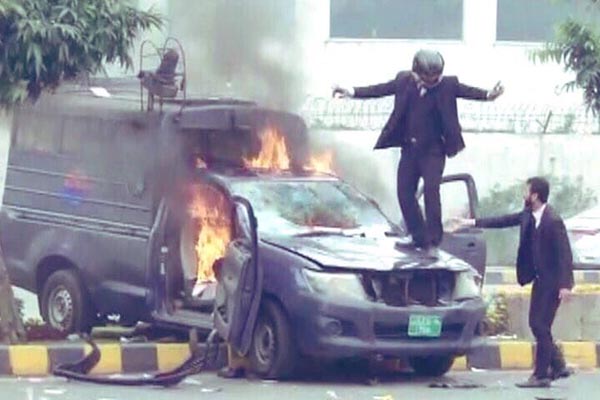 Lawyers on Dec. 11, 2019, set fire to a police mobile van outside the PIC in Lahore. YouTube

Lawyers in various parts of Punjab province announced they would go on strike today (Thursday) over claims of torture and arrest from police following the riot at the Punjab Institute of Cardiology (PIC) a day earlier, as the provincial government deployed additional troops to maintain security in Lahore.

The strikes come as police register two First Information Reports against the protesting lawyers. The first, filed on the complaint of PIC administration at Shadman police station, was registered under Section 7 of the Anti-Terrorism Act and Section 322 (manslaughter), 452 (house-trespass after preparation for hurt, assault or wrongful restraint), 353 (assault or criminal force to deter a public servant from discharging their duty),186 (obstructing a public servant in discharge of public functions), 354 (assault or criminal force to a woman with an intent to outrage her modesty), 148 (rioting, armed with deadly weapon), 149 (unlawful assembly), 337-H (2) (punishment for hurt by rash or negligent act) and 395 (punishment for dacoity) of the Pakistan Penal Code.

The second was filed on behalf of police, who were also targeted by the rioting lawyers. It was registered under Section 7 of the Anti-Terrorism Act and Section 290 (public nuisance), 291 (continuance of nuisance after injunction to discontinue), 148 (rioting, armed with deadly weapon), 353 (assault), 324 (attempt to murder), 436 (mischief by fire or explosive substance with intent to destroy) and 186 (obstructing a public servant in discharge of public functions) of the Pakistan Penal Code.

The Lahore High Court Bar Association said it would go on strike after city officials refused to cave to their demands for the release of all the lawyers detained following the riot, in which the mob vandalized the hospital, set fire to a police vehicle, attacked a provincial minister and caused the death of at least one patient at the hospital. The Islamabad High Court Bar Association also announced that it would go on strike, and demanded the immediate release of all detained lawyers and police action against doctors and paramedics.

According to daily The News, the Pakistan Bar Council claimed it had no involvement in the incident and vowed to take action against those found responsible. However, senior leaders of the group still demanded on Wednesday evening for all the detained lawyers to be released and cases against them to be rendered void.

Meanwhile, while the lawyers are claiming to be the victims of the incident in which they clearly targeted a hospital, doctors across Punjab and in the federal capital have said they would protest against the brutality shown by the legal fraternity. The Young Doctors Association and its affiliated Young Consultants Association both announced nationwide strikes. YCA President Dr. Hammad Butt said that no consultant would perform duty anywhere in Punjab on Thursday.

Government hospitals in Islamabad will also observe a two-hour token strike to express solidarity with health professionals of the PIC, The News reported.

Separately, the Punjab government has indefinitely shuttered the PIC, potentially leaving thousands without affordable medical treatment. There is no update on when the PIC will reopen, but the damage caused by the mob of lawyers alone is estimated to take several days to weeks to repair.

Following the attack, Punjab Chief Minister Usman Buzdar ordered the formation of an investigative committee under provincial Law Minister Raja Basharat to submit a report detailing the reasons for the riot and the parties responsible. Basharat confirmed 39 people had been arrested in relation to the attack, and said reports of dereliction of duty by police would also be probed.

Health minister Dr. Yasmin Rashid vowed on Twitter that no one responsible would be spared. “My blood boils at what these rogue lawyers have done today. We have lost precious lives and our doctors have come under attack. Let it be clear, NOT ONE of them will be spared. I will ensure they are charged for murder under Article 302.”

The government on Wednesday evening also announced it was deploying paramilitary Rangers at important locations across Lahore to ensure security following the mob violence. According to a government notification, 10 platoons and two companies of the Rangers have been deployed.

One platoon each will be deployed at the Governor’s House; the area surrounding GOR-I and GOR-II; GPO Chowk, Mall Road; the Punjab Assembly; the Supreme Court Registry, Lahore High Court; Civil Secretariat; Aiwan-e-Adal; the Inspector General’s office; and the PIC. Two additional companies have been deployed to serve as reserve forces.