Home Latest News One Eid for All of Pakistan This Year, Vows Tahir Ashrafi

One Eid for All of Pakistan This Year, Vows Tahir Ashrafi 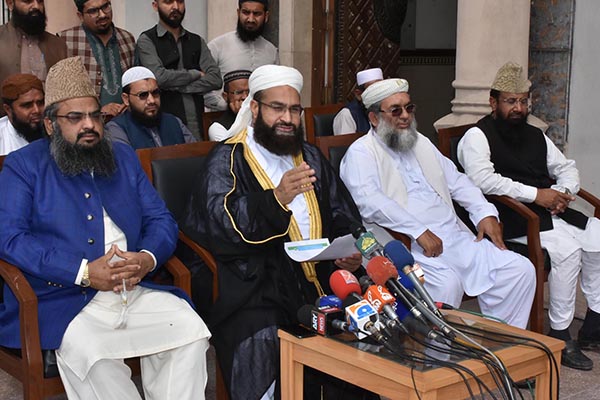 Special assistant to the P.M. claims no mosque or madrassa will face any closures due to the coronavirus pandemic during Ramzan

People across Pakistan will observe Eidul Fitr at the same day this year, Special Representative of the P.M. on Religious Harmony Maulana Tahir Ashrafi announced on Sunday, adding that Ramzan will also start on the same date for the country.

It is a common occurrence for Pakistan to celebrate Eid, and commence Ramzan, on two separate dates, as ulema in Khyber-Pakhtunkhwa often commence observation of the holy month a day earlier than the rest of the country. As a consequence, residents of the province and the erstwhile tribal areas mark the occasion earlier and demand separate days off from the rest of the country. The government has, in recent years, sought to curb this by implementing a scientific lunar calendar.

Addressing media, Ashrafi said the government’s Ruet-e-Hilal moon sighting committee would meet in Peshawar on Tuesday night to determine if Ramzan would start on Wednesday or Thursday. He vowed to ensure that the entire country observed the holy month as a united nation this year.

The SAPM stressed that the government had no plans to order any closure or mosques or madrassas during Ramzan to curb the spread of the coronavirus pandemic, and urged all worshippers to ensure they followed all the government-issued guidelines to prevent any spread through worship sites. “Coronavirus SOPs are being observed in madrassas and mosques across the country,” he claimed.

Last week, the Pakistan Meteorological Department announced that the Ramzan moon might be sighted on April 13, as the weather forecast predicts clear conditions all day. It also warned citizens to take care, as the weather was expected to be warm and dry through most of the holy month.

To a question, Ashrafi also sought to defend Prime Minister Imran Khan linking vulgarity to sexual violence, which has provoked outrage globally. He claimed the prime minister’s words had been “misinterpreted,” adding—without evidence—that obscenity and nudity were among the primary reasons behind the rising incidents of sexual violence. Independent experts have repeatedly stressed that this is untrue, and the only change is in the number of cases being reported; not occurring.

Claiming a “certain section of women and men” have purposefully misinterpreted Khan’s words, xhe stressed that the premier’s words reflected the aspirations of the nation and no one who spreads obscenity should be spared.