by AFP and Newsweek Pakistan September 3, 2014 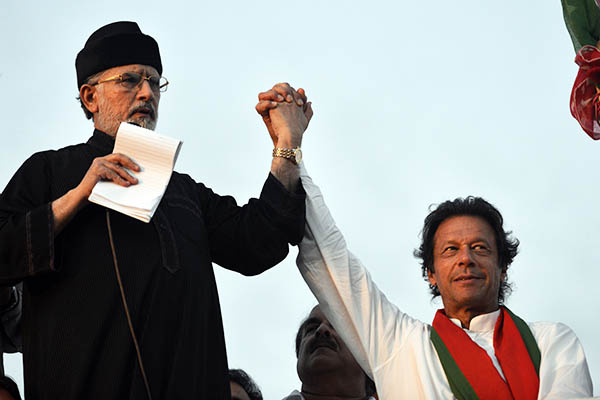 Negotiating jirga claims it is close to breakthrough, as Qadri denies reports he will leave without Nawaz Sharif’s resignation.

Opposition groups led by Tahir-ul-Qadri and Imran Khan agreed on Wednesday to resume talks with the government in order to resolve a political crisis that has rocked the country, but a stalemate over demands for Prime Minister Nawaz Sharif’s resignation remains.

The move came after days of clashes between police and club-wielding protesters demanding Sharif’s resignation left three dead and hundreds injured, raising fears the military may intervene. Khan and Qadri have led the protests, claiming that the 2013 general elections that swept Sharif to power were heavily rigged. Thousands of their followers have set up camp in Islamabad’s ‘Red Zone’ since Aug. 15, but their calls to overthrow the administration have not mobilized mass support beyond their core followers.

Some of the pressure on Sharif eased Tuesday after opposition parties in Parliament backed him to continue, and after a senior member of Khan’s Pakistan Tehreek-e-Insaf (PTI) party said his leader had acted on the Army’s direction—damaging the movement’s credibility.

Parliament called a second special session on Wednesday, which PTI members attended. Senior PTI leader Shah Mehmood Qureshi said his party was willing to resume talks with the government in the presence of a cross-party team.

“We are ready to negotiate, ready to solve the matter, ready to break the silence. Imran Khan hasn’t done all this for himself or Tehreek-e-Insaf, he has done it for the better future of Pakistan,” he said. “We have decided to present our point of view in the opposition Jirga.”

The cross-party team was also set to meet Qadri’s Pakistan Awami Tehreek movement, a spokesman for the cleric said. “Today we are meeting with the government team. The deadlock has been ended and we will hold talks with government team in presence of opposition committee,” said spokesman Raheeq Abbasi. However, Qadri told his supporters later that he would not leave until P.M. Sharif has resigned and dismissed reports that he was close to a breakthrough with the Jirga.

Siraj-ul-Haq, chief of the religious Jamaat-e-Islami party who is leading the talks confirmed the move to AFP.

Khan’s party wants Sharif to step down for at least 30 days so that an impartial probe can be conducted into last year’s elections. A source close to the talks told AFP: “All other matters have been resolved but the main issue is still on table, which is Nawaz Sharif’s resignation. We are trying to sort out a middle way out of it.”

The military, which has ruled Pakistan for more than half its history, has issued a series of public advisories to the government in recent days on how to deal with the crisis, leading to criticism that it is interfering. Analysts and government figures have said the Army may be using the crisis to its advantage to try to assert its dominance over the Sharif government.

The Foreign Press in London and New York brought today surprising news that the law makers inside the Parliament supported democracy, constitution of Apakistan and the Prime Minister Nawaz Sharif.

This news item has a political message that the Protest March and the other semi – religious PAT, both failed to gain support from the armed forces on the issue of resignation of the Prime Minister. This shows another political development that Pakistan Army has become a very mature and understanding about the political culture of democracy – even though it is a very young democracy but still most parties whether religious or secular support the elected government and its Prime Minister. This is a good news for Pakistan.

I believe Nawaz Sharif and its elected government has survived this protest and my understanding of this protest is very positive because it has opened the eyes of ruling party, opposition parties, generally public learnt from the Protest leaders about many political issues and Pakistan now knows what does protest do to the ruling class or classes!

Pakistan needs two basic reforms now from Mr.Nawaz Sharif, plan and reform the size of poverty in Pakistan because PML(N) has no economic planning to reduce poverty and introduce a new State – sponsored Education System for Schooling. I hope the next budget will have these two biggest reforms for Pakistanis who vote for democracy not for dictatorship.