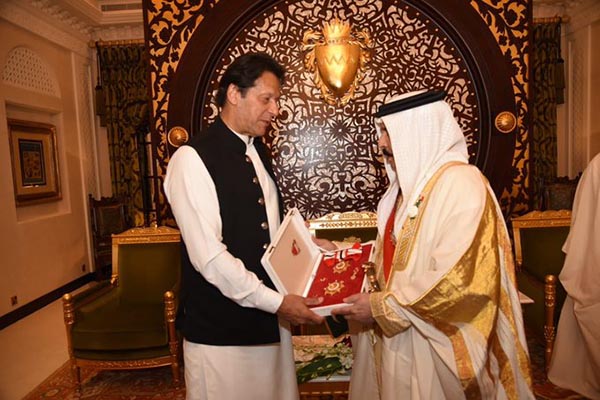 Imran Khan to be conferred Bahrain’s highest civil award during his first visit to Gulf island nation as P.M. of Pakistan

Prime Minister Imran Khan on Monday reached Manama at the official invitation of King Hamad bin Isa al-Khalifa, where he will serve as guest of honor at the National Day of Bahrain.

Upon his arrival at the Al-Qudaibiya Palace, Khan held a formal meeting with Crown Prince Salman bin Hamad bin Isa al-Khalifa in which both leaders discussed bilateral relations and the prevailing regional situation.

“The Prime Minister’s visit to Bahrain will enable the two sides to explore ways and means to further deepen bilateral trade and investments ties. The visit is of special significance and will impart a strong impetus to both sides’ endeavors to forge a closer, multifaceted bilateral relationship,” a press release issued by the Prime Minister’s Office prior to the visit said.

“Pakistan and Bahrain enjoy close cordial ties based on commonalities of faith and culture marked by mutual trust and understanding. The bilateral relationship is broad-based and multifaceted, covering diverse fields including political, trade, commercial, defense, people-to-people contacts,” it added.

This is P.M. Khan’s first visit to Bahrain since assuming office in August 2018. In addition to his talks with the Crown Prince, he is set to hold a one-on-one meeting with King Hamad bin Isa al-Khalifa, and will be honored with the country’s highest civil award. According to the press release issued by the P.M.’s Office, frequent high-level exchanges are a hallmark of the relationship between Bahrain and Pakistan. “Pakistan and Bahrain closely coordinate in multilateral fora, including at the U.N., the OIC and the GCC,” it said. “The two countries have established institutional mechanisms, including bilateral political consultations and joint ministerial commission, to bolster bilateral cooperation in diverse fields,” it added.

The press release also noted that over 100,000 Pakistani expatriates are based in Bahrain, contributing to the country’s socioeconomic development and acting as a bridge between the two nations.

Bahrain and Pakistan have traditionally enjoyed strong ties but have also faced some controversy. In 2011, retired officials of Pakistan’s armed forces were recruited by Bahrain to help quell a popular uprising, More recently, Bahrain has offered to mediate between Pakistan and India on the Kashmir issue, though it raised eyebrows in Pakistan in August after it took action against Pakistanis who protested in support of Kashmir following India’s scrapping of the region’s special status.

The prime minister is being accompanied by a high-level delegation, including members of the federal cabinet and senior government officials.