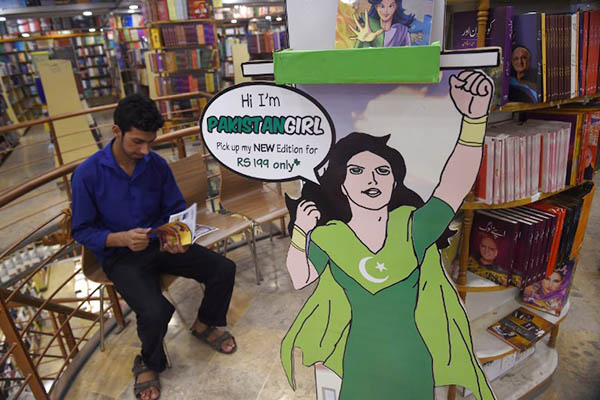 Pakistan’s newest female superhero has vowed to battle venal officials and protect battered women, as her creator tries to inspire the next generation to fight injustice in a deeply patriarchal society.

The new Pakistan Girl comic series is based on Sarah, a normal teenager with a pet cat who discovers she has superhuman powers after waking from a coma caused by a blast in her village. Donning a green cape, Pakistan’s national color, the protagonist whips a man beating a woman in a market and saves a young girl taken hostage by a bribe-seeking police officer in the series’ first comic book released this summer.

The creator of the English-language comic says he hopes the superhero will give young girls across Pakistan a role model and embolden them to fight corruption and violence in a country where crime is rife in major cities and corruption is the norm. “There’s a huge shortage of female role models and superheroes in the mainstream media here,” said author Hassan Siddiqui. “We wanted to create a strong female character for the girls in Pakistan and even the young boys in Pakistan that they can look up to.”

Women in Pakistan have fought for their rights for decades but so-called “honor killings” and other violence against women remains commonplace. Netizens on social media have welcomed the comic, writing largely positive reviews online and calling for more superhero stories in the future.

“Its a very brilliant step by you guys… I’m a big fan of Marvel and DC comics and looking forward for this too,” wrote fan Syed Hassan Nasir on Facebook.

The author said he now plans to work on an Urdu version of the comic with the aim of reaching millions of readers across the country. He is also mulling a possible animation adaption.

But reaching the masses won’t be easy. Pakistan’s education system has been woefully underfunded for decades, exacerbating illiteracy with more than half of the country’s eight-year-olds unable to read.

According to a 2016 government study, a staggering 24 million Pakistani children are out of school, with a larger share of girls staying home than boys—12.8 million compared to 11.2 million. But new fan and school principal Saadia Adnan hopes the comic will provide a new way to help educate children, while also steering them clear of gender stereotypes.

“I think we should be teaching them through this kind of literature because that’s actually the tender age when they are building their own images of their future life,” said Adnan after browsing through a bookstore copy.

Pakistan Girl also follows in the footsteps of the country’s hit 2013 comic The Burka Avenger, which chronicled the adventures of a mild-mannered teacher who fights gangsters trying to close down the girls’ school where she works.