The total number of confirmed coronavirus cases in Pakistan hit 5,374 on Monday, against 1,095 recoveries and 93 deaths, leaving 4,186 active cases in the country.

On Sunday night, Punjab Chief Minister Usman Buzdar confirmed two more deaths in the province due to COVID-19, taking the death toll to 23. He said 130 new coronavirus cases had been reported, bringing provincial tally to 2,594.

“As of today number of confirmed COVID-19 cases has reached 2,594, including 701 zaireen [pilgrims], 821 Tablighi Jamaat members, 89 prisoners and 983 others,” he posted on Twitter. “Our healthcare staff is dealing with this pandemic efficiently and IA we will be able to avert this crisis but with your cooperation!” he added.

Punjab is currently leading in total tests administered—a key step according to international health experts to effectively isolate and prevent the spread of COVID-19—with 38,199 thus far. This is still far lower than required for a province with a population of over 100 million.

The Sindh Health Department on Sunday issued a report on the spread of coronavirus in the province. One of the key takeaways is that of the 1,411 cases in the province, 171 (approximately 12 percent) are younger than 19 years old. Similarly, it found that 70 percent of all infections were occurring in males, while 30 percent were being reported from women.

Overall, Sindh province has thus far reported 30 deaths from the coronavirus, with 389 recoveries. There are 992 active cases in the province. On Sunday, the provincial government announced that it was rescinding an earlier order to seal off entire union councils where the virus incidence was high. Instead, it said, identified neighborhoods and street blocks with the highest rates of infections would be sealed and placed under stricter lockdowns in a bid to curb the local spread of the disease.

In Khyber-Pakhtunkhwa province, the number of confirmed COVID-19 cases has risen to 744, with 47 reported in the past 24 hours. The province continues to lead in the number of fatalities caused by coronavirus, currently reporting 33 deaths—3 of which occurred in the last 24 hours. Overall, there have been 145 recoveries, leaving 565 active cases in the province. Health and Finance Minister Taimur Jhagra voiced a note of optimism on Twitter: “My personal view is that with hospital systems still not yet choked, and testing bottlenecks, the actual fatality rate will be lower than 1% across Pakistan,” he said, while comparing fatality rates in Sindh and Khyber-Pakhtunkhwa. 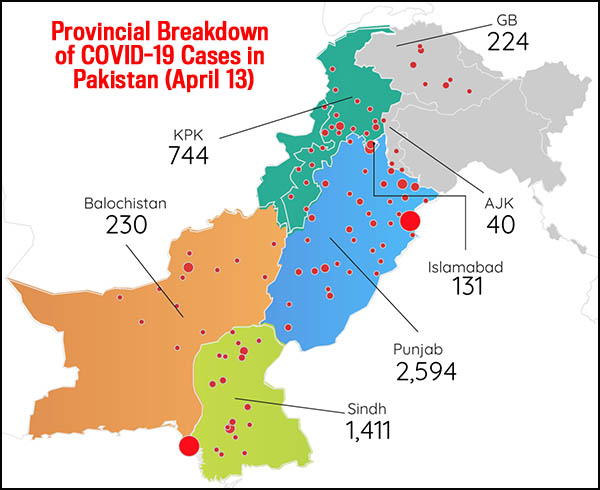 Balochistan province, which Prime Minister Imran Khan has admitted lags behind the other provinces in terms of healthcare, has thus far reported 230 cases, with 123 recoveries and 2 deaths. Overall, the province currently has 105 active cases of COVID-19. Balochistan government spokesperson LIaquat Shahwani on Saturday told a press conference that the province had extended its lockdown to April 21 already but warned further extensions were not sustainable. “If we extend the lockdown for another three months, it could cause starvation for more than two million people in Balochistan,” he said.

In the federal capital, the tally of confirmed cases rose to 131, with 15 recoveries and 1 death, leaving 115 active cases. Meanwhile, in Gilgit-Baltistan, the infections rose to 224 with 3 deaths and 149 recoveries. In Pakistan-administered Kashmir, which has thus far reported no deaths from COVID-19, the total number of confirmed coronavirus cases rose to 40, with 2 recoveries.

Most parts of the country remain under various restrictions, with the government set to announce its future plans today, as the existing federal lockdown is set to end from April 14. Public and private offices remain closed, apart from businesses deemed ‘essential,’ and public and private gatherings have also been banned. Sindh C.M. Murad Ali Shah has urged the federal government to extend by a week the existing lockdowns, warning that the situation could worsen if the movement restrictions are ended too early.

Globally, the virus has now infected more than 1,853,400 people, with over 114,250 reported deaths. Governments across the world have halted flights, locked down towns and cities and urged people to stay at home. Overall, around 423,700 patients of the 1.8 million+ infected have recovered thus far.