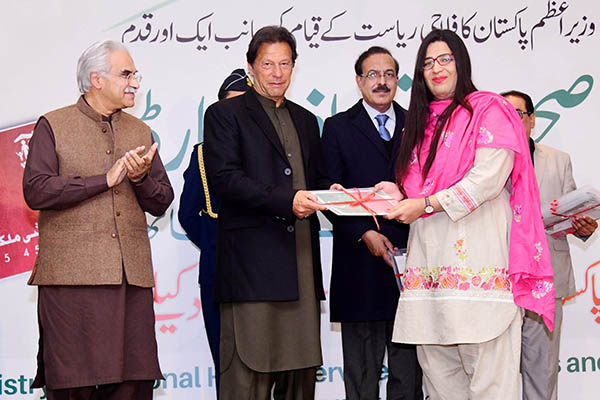 The Sehat Insaf Card will provide health insurance for members of Pakistan’s transgender community to ensure the rights and protection of the most vulnerable segments of society, Prime Minister Imran Khan said on Monday.

Addressing a ceremony to launch the Sehat Insaf Card, a subsidiary of the Pakistan Tehreek-e-Insaf-led government’s Sehat Sahulat program, Khan claimed this was the firs time in Pakistan’s history that an incumbent regime had taken responsibility of the transgender community, with an aim toward giving them a “a sense of ownership” over their status as Pakistanis. “Pakistan was established on the basis of justice, humanity and humane feelings for the downtrodden,” he added.

As he does in every major address, Khan criticized previous governments for not protecting the rights of transgenders. He claimed, wrongly, that past regimes had not even accepted the existence of the transgender community. In 2017, the Pakistan Muslim League (Nawaz)-led government issued the country’s first passport with a transgender category. In 2009, the Supreme Court ruled that transgenders could get national identity cards as a “third sex.” A new bill, signed into law by the caretaker government last year, mandated the government to set up dedicated safe spaces with medical and educational facilities for transgender individuals. The law already mandates the facility being provided by the PTI.

Khan said the government would provide health insurance to all segments of society, adding the PTI would strive to remove negative perceptions about the transgender community across Pakistan. He said the initiative would be available to all individuals registered with the National Database and Registration Authority (NADRA) from the Islamabad Capital Territory, Azad Jammu and Kashmir, Gilgit-Baltistan and all four provinces.

The prime minister said the Sehat Insaf Card would open up the options available to the impoverished, noting that families could now confidently avail treatment facilities at various health facilities across the country.

Khan also appreciated Special Assistant to the P.M. on Health Dr. Zafar Mirza for proposing extending the health insurance facility to the transgender community, saying they had been facing myriad social problems.

Mirza, during his address at the ceremony, said 6.8 million families had been provided the Sehat Insaf cards already, adding the government wanted to expand this safety net to 15 million deserving families by the end of next year.

He said the Sehat Sahulat program had been launched in 84 districts, and 300 private sector hospitals were providing health services to deserving people under it. On the prime minister’s directions, he said, Sehat Insaf cards had also been given to residents of Tharparkar and the tribal districts. Work is underway to provide these cards to residents of Pakistan-administered Kashmir and Gilgit-Baltistan also, he added.

Referring to the health insurance for transgenders, Mirza said the government had collected data about the community with the assistance of its leaders. Lauding the passage of the Transgender Protection Act last year, he said it ensured equal rights and sought to end discrimination in all societal sectors.

Reem Sharif, a transgender who works for a non-governmental organization in Islamabad, told state-run Associated Press of Pakistan that the Sehat Insaf Card was a step toward inclusivity for her community. She said transgenders often faced discrimination at hospitals and she hoped the cards would grant them equal rights of medical treatment at designated facilities across the country.

Muhammad Faisal Qureshi, a teenage transgender recently employed in the Pakistan Baitul Maal, also hailed the initiative, saying it would significantly raise their confidence in seeking medical care in case of any emergency.

A study conducted by the Forum of Dignity Initiatives and Blue Veins last year found that 78.75% respondents from the transgender community felt they lacked access to qualified health care providers. Additionally, 92% of the respondents reported facing some form of discrimination. Under the government’s program, it is believed this harassment would end and transgenders would be one step closer toward full inclusivity in Pakistan.

This is a big deal for Pakistan.

Its always so interesting seeing how health insurance is different than from how it is in the UK.