Pakistan Reports 97 Deaths from COVID-19 in Deadliest Day Yet

In its deadliest day yet, Pakistan on Saturday reported 97 deaths due to the novel coronavirus, raising its total fatalities due to the disease to 1,935.

The country, which “cannot go back to lockdown,” according to Prime Minister Imran Khan recorded 4,734 new infections against 22,185 tests—a positive ratio of 21.34 percent—raising confirmed cases to 93,983.

There are currently 59,467 active cases of the coronavirus in the country.

Prime Minister Imran Khan, in a televised address intended for his volunteer Corona Relief Tiger Force, said that the country’s economy could not sustain another lockdown, adding that it was fortunate that Pakistan had not suffered “the kind of disaster” that had been witnessed in major viral hotspots like Italy, the U.S. and the U.K.

He said he believed that if citizens fully adopted the government’s SOPs to curb the spread of the virus, the country could significantly reduce infection rates.

The country’s most populous province has yet to issue a formal notification listing penalties for SOP violations in public places, but police have started collecting fines from citizens, according to reports in local media.

During a session of the Punjab Assembly on Friday, Leader of the opposition Hamza Shehbaz expressed alarm over Pakistan’s COVID-19 situation. “The COVID-19 is not a disease of elite only. The lockdown isn’t imposed on the direction of elite class, neither was it lifted by following the directives of elite. We are facing this hard situation today just because of not taking timely measures,” he said.

On Saturday, authorities reported 30 new deaths due to COVID-19, raising total fatalities to 659. The province also reported 2,164 new infections, raising confirmed cases to 35,308, against 7,953 recoveries. There are now 26,696 active cases of the virus in Punjab province.

Urging the citizens of the province to exercise caution, and adopt precautionary measures against coronavirus infection, Chief Minister Murad Ali Shah on Friday said there were 370 patients currently in critical condition, including 62 on ventilators

The total number of confirmed COVID-19 cases in the province on Saturday morning rose to 34,889. Additionally, the province’s death toll climbed by 40 to 615, while its recoveries rose to 17,787. Overall, the province now has 16,487 active cases of the novel coronavirus.

Adviser to the C.M. on Information Ajmal Wazir on Friday announced that the provincial government was taking strict action against anyone violating SOPs to curb the spread of COVID-19. “Several markets across the province have been sealed for not fully implementing the SOPs,” he added.

There are currently 8,552 active cases of coronavirus in the province. 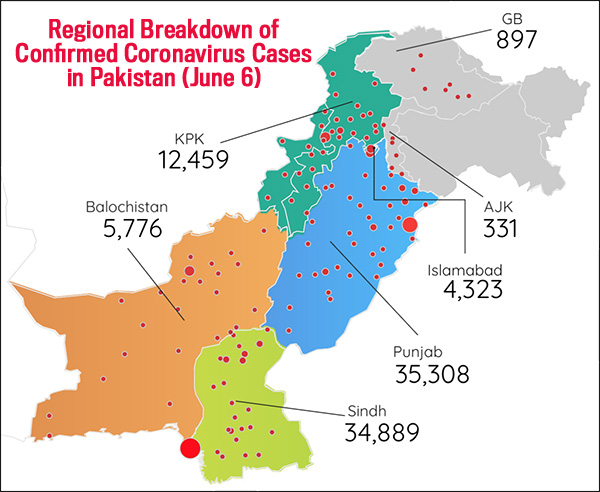 Provincial spokesman Liaquat Shahwani on Friday warned that if citizens and businesses continued to violate SOPs, the government would be forced to implement a three-day “full lockdown” every week, instead of the current “smart lockdown” under which only Friday experiences a full lockdown.

He also said that the government was still deliberating on restoring public transport, adding that there were still districts in the province that had very few, or no, confirmed cases of the coronavirus, and the government did not want to risk the infection spreading.

Overall, confirmed cases of the novel coronavirus in the province rose by 194 to 5,776, with 1 new death raising fatalities to 54. Overall, 2,110 patients have recovered from the deadly virus, while there are currently 3,612 active cases of COVID-19.

On Saturday, the Islamabad Capital Territory raised its confirmed coronavirus infections by 377 to 4,323, with 4 new deaths raising the death toll to 45. Overall there have been 629 recoveries, leaving 3,649 active cases of COVID-19.

Confirmed cases of the novel coronavirus in Gilgit-Baltistan rose by 45 to 897 on Saturday morning. Overall, the region has thus far reported 13 deaths and 551 recoveries, leaving 333 active cases.

In Pakistan-administered Kashmir, confirmed cases increased by 32 to 331. In the past 24 hours, the region has reported 1 new death and 3 recoveries. Overall, it has thus far reported 8 deaths and 185 recoveries, leaving 138 active cases of the coronavirus.

Globally, the virus has now infected more than 6,851,513 people, with over 398,250 reported deaths. Governments across the world have halted flights, locked down towns and cities and urged people to stay at home, but there are signs of easements in nations that have reined in the virus’ spread to help shuttered economies recover. Overall, around 3,351,320 patients of the 6.8 million+ infected have recovered thus far.