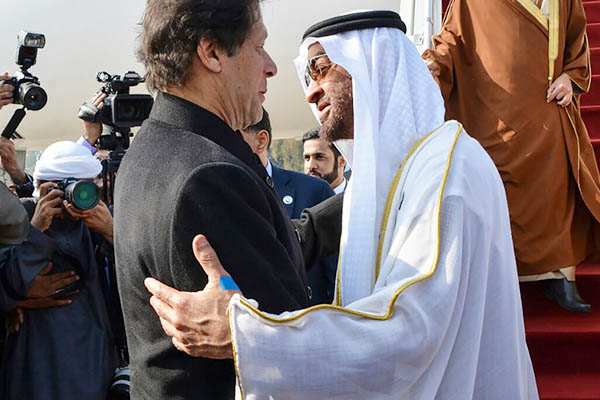 In a rare gesture, Prime Minister Imran Khan met Al Nahyan at the Pakistan Air Force base and a formation of air force jets marked his arrival with a flyby. The crown prince was also presented with a guard of honor by a contingent of the Pakistani armed forces.

The United Arab Emirates is Pakistan’s largest trading partner in the Middle East and a major investment source, Pakistan’s foreign ministry said in a statement ahead of the visit. More than 1.5 million Pakistanis live in the gulf state and send millions of dollars in remittances back home, it added.

Al Nahyan, who is also deputy chief of the U.A.E.’s armed forces, had a “one-on-one meeting” with Khan, followed by delegation-level talks, the statement said. “They resolved to take all necessary measures to deal with matters related to trade enhancement, and decided to form a Task Force to achieve this objective,” said a joint statement issued after talks ended.

The U.A.E. announced in December that it would deposit $3 billion in the State Bank of Pakistan to help “enhance liquidity” as the country struggles with a widening balance of payments crisis. The statement quoted Khan as saying that “this financial support shows the U.A.E.’s continued commitment and friendship that has remained steadfast over the years.”

The Pakistani rupee plunged almost five percent to a record low at the end of November, after what appeared to be the sixth devaluation by the central bank in the past year. It also secured $6 billion in funding from Saudi Arabia and struck a 12-month deal for a cash lifeline during Khan’s visit to the kingdom in October.

Islamabad has also received billions of dollars in Chinese loans to finance ambitious infrastructure projects. A team from the International Monetary Fund visited Pakistan in November to discuss a possible bailout with officials but talks ended without agreement.