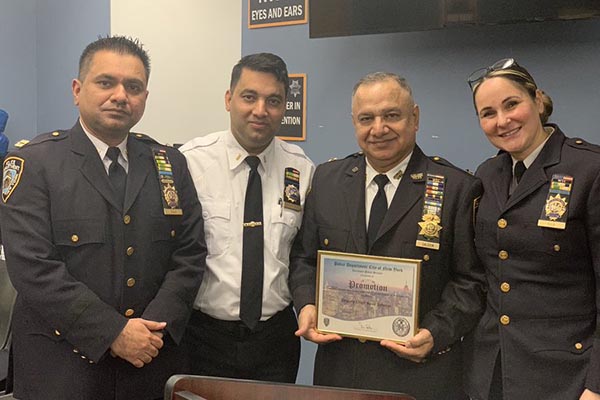 Nasir Saleem, second from right, with fellow members of the auxiliary force. Twitter

A volunteer with the NYPD auxiliary program for over 28 years, Saleem is the first Muslim to head the 5,000-strong force

A Pakistani-American man has been appointed the head of the New York Police Department’s volunteer force, becoming the first Pakistani—and the first Muslim—to be tapped to lead the 5,000-strong auxiliary force.

Nasir Saleem, who graduated from Karachi University in 1983, has been volunteering with the NYPD auxiliary forces since 1991. Over the past 28-odd years, he has volunteered around 14,000 hours with the force, according to a Twitter posting by NYPD Chief Fausto Pichardo. “Our NYPD Auxiliary officers serve this city day in and day out, in all types of weather, and in every community—and it’s all volunteer work! Congrats to Nasir Saleem on his promotion as the first Muslim Auxiliary Deputy Chief. His 28 years and 14k hours does not go unnoticed,” he said.

According to Associated Press of Pakistan, Saleem dedicated to Pakistan his success in the volunteer force. “It’s a great honor … I am speechless,” he told journalists after taking oath of office as the Auxiliary Deputy Chief. “I dedicate my new title to Pakistan,” he added.

Auxiliary Police officers are trained to observe and report conditions requiring the services of the regular police. They aid, on a purely voluntary basis, in non-enforcement and non-hazardous duties. They also assist with uniformed patrols, providing traffic control, crowd control, and other services during major events. New York has the largest Auxiliary Police program in the United States.

Saleem was inducted into his new assignment at a simple ceremony attended by senior police officials and members of the Pakistani community. Badges were pinned on his uniform by Captain Adeel Rana and Lt. Zaigham Abbas, fellow Pakistani-American police officers.

Pakistan Must Unite to Stamp Out Intolerance, Says...