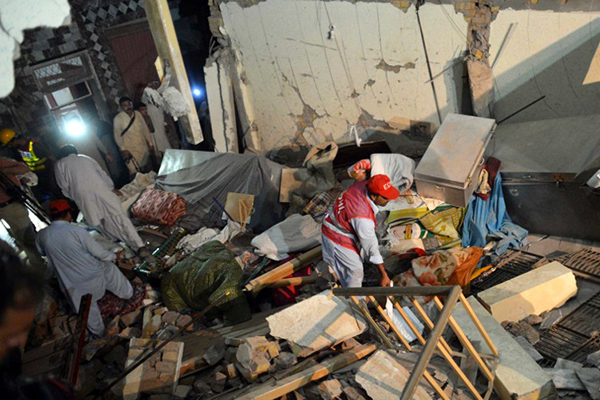 The site of yesterday’s suicide bombing in Peshawar. A. Majeed—AFP

All campaign activity to halt at midnight tonight.

Suicide bombers of the Pakistani Taliban have fanned out across Pakistan to mount attacks on Election Day, May 11.

According to a Tehreek-e-Taliban Pakistan militant, the organization’s leader Hakimullah Mehsud has personally ordered bombings on polling day. “The Taliban has dispatched several [suicide bombers] to carry out attacks on Election Day,” he said on condition of anonymity. A letter, apparently sent from Mehsud to Taliban spokesman Ihsanullah Ihsan, maps out the plan for the bombings. “You take care of attacks in Punjab and Sindh. I will take care of Khyber-Pakhtunkhwa and Balochistan,” it says.

The Taliban have called democracy a “system of infidels.” They have also declared war on the three main parties—Pakistan Peoples Party, Muttahida Qaumi Movement, and Awami National Party—in the outgoing federal government. Militants have attacked the campaign offices of these parties as well as their candidates, on the campaign trail and in their homes. The attacks have claimed at least 113 lives since mid-April, according to an AFP count.

Pakistan has said it will deploy more than 600,000 security personnel on polling day. But while many expect polling in the Punjab, Pakistan’s largest province, to be relatively peaceful, fear of attacks in the other three provinces may suppress voter turnout.

Militants have also warned residents of the federally-administered tribal areas against allowing women to vote. A pamphlet distributed recently by a previously unknown group in North Waziristan has threatened people with punishment if they do not comply. “The people of Waziristan are hereby warned that they should not allow their women to cast votes and shouldn’t let any candidate influence them,” said the pamphlets signed by “Mujahideen” and thrown from vehicles into shops in Miranshah. “Heed our words, this kind of disgraceful act will not be tolerated and anyone influencing women to cast a vote will be punished.” In 2008, not a single vote was cast at 564 of 28,800 women’s polling stations, officials say.

The Taliban threats have cowed the PPP, which has run a leaderless campaign. Its chairman Bilawal Bhutto Zardari—ineligible because of his young age for contesting—has not been seen in public. Meanwhile, the MQM said it was aggressively campaigning on social media because of the threats.

The only mainstream parties which have been campaigning freely are Nawaz Sharif’s Pakistan Muslim League (Nawaz) and Imran Khan’s Pakistan Tehreek-e-Insaf. All campaign activity has to come to a halt tonight, in accordance with the Election Commission of Pakistan’s orders.

Sharif is scheduled to make multiple appearances in Lahore. He will conclude his campaign at the shrine of Sufi saint Hazrat Data Ganj Bukhsh, addressing supporters there at 10 p.m., according to a PMLN officer. Khan will address his party’s campaign finale in Islamabad via satellite from his hospital bed in Lahore. Khan is bedridden since his fall on Tuesday at a campaign event and won’t be able to cast his own vote on Saturday.