Home Lightbox ‘Paris of the East’

‘Paris of the East’ 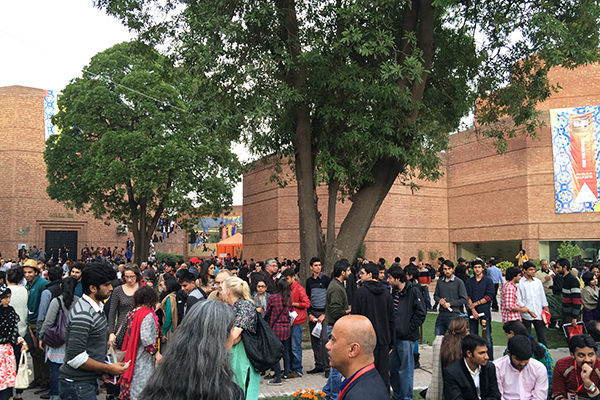 The third edition of the Lahore Literary Festival was its biggest and best yet. The three-day LLF 2015 began Feb. 20, on an eerily dark and thunderous morning. By the time it concluded on Feb. 22, the euphoric, unanimous consensus was that the festival founded by Razi Ahmed served as a beacon of hope not only for Lahore but also for Pakistan. “You have truly made Lahore the Paris of the East,” author Laurent Gayer said about LLF-time Lahore. He was one of 130 speakers from home and abroad that some 75,000 people packed halls to hear and meet. Roger Cohen, another delegate, called it “a wonder of creativity, eclecticism, ideas and dialogue” in his New York Times piece. Peter Oborne hailed it as “a dazzling celebration of Pakistani poetry, music, dance, history and politics” in New Statesman. “If the festival’s schedule was a blueprint,” wrote Lyse Doucet for the BBC Website, “it is a future which treasures a past that includes jewels like Noor Jehan—known as the Empress of Song—as well as literature of many centuries gone by, in many local languages … And it is a future based on rare hope that age-old conflicts can be resolved in years to come.” LLF 2015 is over. Lahore can’t wait to host LLF 2016.