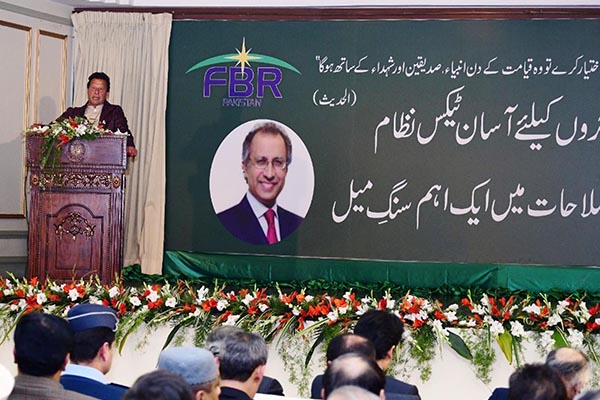 Pakistan cannot prosper until its citizens, and the business community, recognize that there can be no progress so long as people refuse to pay taxes, Prime Minister Imran Khan said on Monday.

Addressing the business community at an event in Islamabad, the prime minister urged them to pay all due taxes for the development of the country. He said the Pakistan Tehreek-e-Insaf-led government was working to provide a conducive environment for profitable business ventures, noting his dream of a developed Pakistan cannot be realized in the absence of industrialization.

Khan said his government was taking “bold steps” to ensure ease of doing business in Pakistan, adding Islamabad’s improvement on the World Bank Ease of Doing Index supported this view.

The prime minister, in a separate meeting on licensing requirements for small businesses, directed provincial governments to abolish approximate 150 conditions for which licenses were required at the local level within 30 days.

He urged the provincial governments to simplify the process for obtaining licenses, and directed them to introduce an automated system by employing modern technology. He particularly slammed the licenses required by grocers, clothing stores and bakeries as needlessly creating difficulties for the common man.

Khan also told a delegation of newly elected presidents of Chambers of Commerce and Industries from across the country that the government had decided to make Pakistan an industrial power and it would provide all possible assistance to help industrialists achieve this goal.

The prime minister appreciated the delegation’s keen interest in investing in information technology, halal food and pharmaceutical sectors and issued directions to relevant ministries to provide all possible facilities in this regard. He also directed the chairman of the Federal Board of Revenue to conduct an ‘open house’ every week to learn and address the problems facing industrialists.