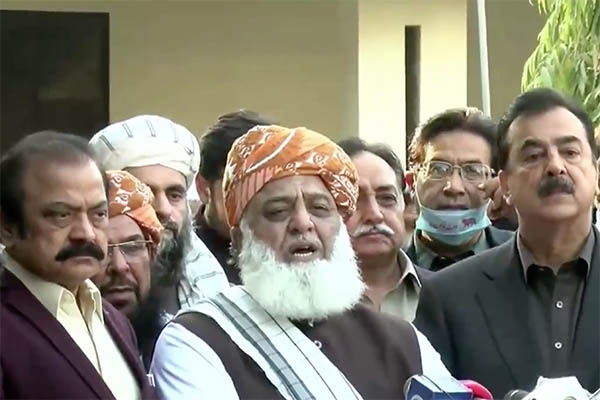 The united opposition’s Pakistan Democratic Movement (PDM) on Sunday announced that its Multan rally would proceed as planned despite the government’s arrest of several workers and leaders in a bid to prevent the political gathering from going forward.

Addressing the media in Multan, PDM President and Jamiat Ulema-e-Islam (Fazl) chief Maulana Fazlur Rehman warned that if the government continued its attempts to block the opposition’s constitutional right to assembly, it could soon be forced to march on Islamabad. “It seems like the government wants us to march to Islamabad earlier [than previously scheduled January 2021],” he said, adding that the Multan rally would continue as planned at Qila Kohna Qasim Bagh.

“Our political workers are being arrested from Multan and Dera Ghazi Khan,” he said, and questioned why the government did not see any spread of COVID-19 in its own political gatherings, as lawmakers have claimed the opposition’s rallies are only being blocked to curb the spread of the pandemic.

Accusing the PTI of “state terrorism,” Rehman said that the government’s actions had started a “war” that would have to proceed to its natural conclusion. “Every section of the country is upset today,” he said. “We will not be intimidated,” he said, adding that any attempts to stop the rallies would only result in people taking to the streets to express their discontent.

“If they do not let us hold this rally, then rallies would be held in every district of Pakistan. If our workers and participants cannot reach the rally, we will fill up the jails,” he warned. “We will soon reach Islamabad and put the government in its place,” he added.

Pakistan Muslim League (Nawaz) leader Rana Sanaullah, meanwhile, said party Vice President Maryam Nawaz would attend the Multan rally at all costs. “Maryam Nawaz will reach Multan at any cost and will do so by breaking all the barriers,” he said. “Imran Khan has been saying for three years that he won’t spare anyone. Now we won’t spare him,” he added.

Pakistan Peoples Party (PPP) leader, and former prime minister, Yousaf Raza Gilani also vowed to ensure today’s rally went forward as planned. Announcing that Aseefa Bhutto-Zardari, daughter of former president Asif Ali Zardari, would address the rally, he claimed the government’s action had ensured the rally’s success before it had even occurred. “[P.M. Khan] promised on the floor of the House that he will provide containers and food to the opposition if they want to hold rallies. Half that promise has been fulfilled, the containers have arrived,” he said, referring to the shipping containers blocking major thoroughfares across Multan.

Gilani also condemned the arrest of PDM workers by police earlier on Sunday, saying the alliance has mobilized the People’s Lawyers Forum over the detentions.

On Saturday, police in Multan arrested over 30 opposition workers, including PPP leader Ali Qasim Gilani, when they tried to enter the stadium to prepare the venue for their rally. The administration has also sealed all routes to the stadium, and tightened security to prevent any unauthorized entry.

Prime Minister Imran Khan, in a series of tweets on Sunday, slammed the opposition, accusing its leaders of not caring about people’s lives in their bid to protect their “looted wealth.” He claimed the Multan rally was just another attempt to secure ‘NRO,’ adding it would spread COVID-19 and endanger lives and livelihoods.