Home Culture People Who Have Nothing

People Who Have Nothing 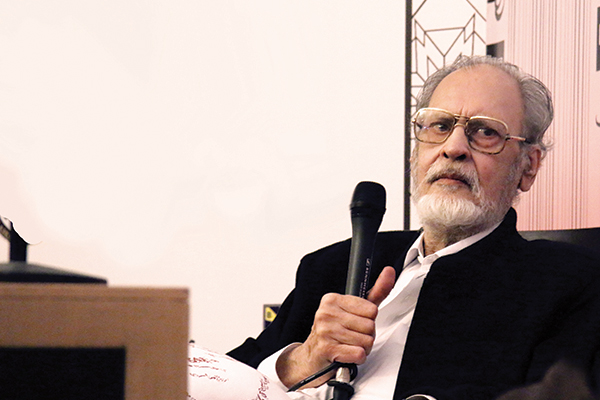 When the seven-years-in-the-making Nadaar Log was finally published, in 1996, Abdullah Hussein requested a six-month moratorium on reviews so that readers could make up their own minds without interference from critics. The novel evolves from the naturalism that reached its acme in Nasheb, his collection of novellas, but it can be connected to his first bestselling novel, Udas Naslein, as the work of one sensibility.

Naturalism is one step ahead of realism but short of the expressionist works that sprang from naturalism in Europe. Roughly, it is a documentary commitment to reality. Like Zola, who wrote his novels on the basis of “documentation,” Hussein, who died in Lahore on July 4 at 83, went around making notes about physical processes; his work recorded the reality of his times like a photograph. Again and again, his descriptions strike one as cinematic. Indeed, his story about Pakistani émigrés in London has been filmed, and PTV turned another of his stories into a play.

Hussein imagined his characters in pictures. Normally, fiction relies on the comment of the author to delineate character. But Hussein lets his characters roam freely in a highly visual world. The result is that the world is stark in its contemporaneity, and the characters that people it stare out of fully developed portraits. The novelist holds the attention of the reader because the events described are full of journalistic detail. Subliminally, the fictive characters become real and get under one’s skin. Reality is palpable, documented, and “provable.” That means that characters have to leave their world of imagination and become real. That is the new thing in Urdu literature, although not without literary precedent in the classics.

“Nadaar Log” or “people who have nothing” is a term often applied to describe general poverty, but in Hussein’s novel it is a comment on society and civilization. From the drug-addicted, share-cropping homeless beggar to a high official in the Army, everyone is “nadaar” because it is society “which has nothing.” Hussein doesn’t make judgments because that is not his technique, but the total effect of the novel is akin to the sense of the Hispanic civilization you get in Márquez or the Indian civilization you get in Rushdie. The creative act in Márquez and Rushdie is strongly moored in language, with all its power of poetic metaphor and lyricism. Hussein’s language is functional, pared to the bone to prevent its intrusion into storytelling. As it happens with great writers who insist on functional prose, Hussein’s style grows on one. He doesn’t have Manto’s simplicity-with-rhythm, yet the language impresses in the end.

Márquez explores the soul and wins by finding nothing there, but in the process he creates a language that overcomes the theme. The Hispanic civilization is explained as cycles of tragedy which strip the landscape bare of all morality with well-delineated characters dangling like puppets from the fingers of tradition. The terminal effect is that of a whole civilization where people really “have nothing” but a destiny foretold. Hussein reaches the same terminal effect: a culture of defeat set in a civilization of futility. Márquez is cinematic in his own way but his scenes are from a painting of Turner with linguistic mists creating mystery around it. Hussein is cinematic in a photographic way, made interesting through the cataloguing of facts.

In 1963’s Udas Naslein, Hussein had used a device to underline the sensuality of his main characters: child hero meets child heroine while she is climbing a tree and he sees up her frock. Six years later, Nabokov used the same device in Ada, but here the girl slips from the branch and falls on top of the boy underneath, her nudity pressed against his face. In Nadaar Log, Hussein introduces a variation on the device in a scene which may be called one of the raciest in the novel. Jagat Singh is standing under the balcony of a scared Kalvanti and will go away only after she has thrown her shoe down for him. After the shoe is thrown down, he wants her to show him her bare foot, then her leg, and finally her crotch. When she rebukes him and threatens to urinate on him, he gets excited at the prospect. Kalvanti makes good on her threat, and Singh gladly laps up the urine raining down on him.

Hussein’s canvas was that of middle Punjab populated by Muslims and Sikhs before 1947 and by Jats and Rajputs after it. In Nadaar Log, Ayub Awan lives among Sikhs and shares their social ethic. He marries his overtly sexually excited sweetheart after abducting her, joins the Army—as most Rajputs did—fights in the World War, and returns home to bear the wrench of Partition and migration. After 1947, Awan’s contact with his Sikh friends is reestablished through smuggling. A spiritual bond survives through outlawry and has a morality far above that established by state laws. Hussein watches like a hawk over the details. After a successful smuggling mission, both parties gather to celebrate their earnings with platters of sweetmeat. After overeating, when Awan’s servant breaks wind loudly, the author doesn’t miss it.

Awan’s elder son, Ejaz, loses his job as a schoolteacher because of his activities in the “union,” an abomination in the 1950s when the only evil threatening Pakistan was Communism. He later drifts into the politics of brick kilns where bonded labor is one of the factors of production. He defends the workers (and sleeps with the wife of the worker he is defending), which prepares him for politics and a balanced relationship with his wife. Sarfraz, his younger brother joins the Army, gets engaged to the daughter of a colonel and becomes a POW in India. With his roman-prison novel, Baagh, behind him, Hussein deftly describes the captivity and the change that comes over Sarfraz after his release. He is engaged to Nasima but falls in love with Nasreen, whose mystery springs from the banal fact that she is of low birth while surrounded by the opulence of the retired Army officer she lives with as his daughter.

Ejaz drifts into the socialist politics of the Pakistan Peoples Party, is thrown out of it after opportunists take it over, and then becomes a journalist to expose the scandal of defective ghee-making in a factory. Here Hussein walks around the scene like Zola. One gets to know all about the chemical processes used in the industry to whiten the ghee and on how the owners cut corners endangering the lives of consumers. When the scandal is published in a journal, we get to know how journalism works in Pakistan; and when the libel case comes up, we learn how the magistracy works. The court scenes are accurate but don’t cloy, and the journalist loses the case in spite of the fact that the hearings had clearly gone in his favor.

Ejaz and Sarfraz, after having grown up in a society “that has nothing,” finally clash with the state “that has nothing.” Journalist Ejaz makes public the details of Hamoodur Rahman Commission Report indicting the Pakistan Army for genocide and looting in East Pakistan. He is picked up by a military agency and tortured. Sarfraz is arrested for slapping an officer during Operation Mountain Goat in Balochistan and is then implicated in the “conspiracy” that he was supposed to have joined when he was a prisoner in India. The disclosure of the Commission Report is also pinned on him and he is tortured by the Army before being dishonorably discharged. Back home, both brothers slump back into meaninglessness and incompletion, as two people who have nothing living in a state that has nothing. But Hussein sits down to his 9th chapter as if the story hasn’t yet finished. He begins it with an English quotation (which he doesn’t translate) from Stephen Hawking’s A Brief History of Time. A child asks: “We remember the past, but why don’t we remember the future?” After that the pages are blank. This is the closest Hussein comes to comment: it is a doomed civilization.

When Hussein wrote Udas Naslein it was rated among Urdu’s 10 best novels and compared to Qurratulain Hyder’s Aag ka Darya because of its vast civilizational canvas. Hyder’s work was seen as a romantic search for definition. In a way she tried to look into the souls of the people who made up this civilization from the days of Buddha to the Aligarh of the 1940s. Hussein’s novel doesn’t look for the soul. In fact, his characters have no souls; they have bodies that are put through the wringer of violent incidents and yield a lot of pain without meaning. The final effect is existentialist without any teleology. Reading Nadaar Log may be tough, but literature is more demanding of its readers than a bestselling spy thriller.

Abdullah Hussein translated Udas Naslein into English as The Weary Generations for the 16-strong UNESCO Collection of Representative Works from Pakistan. Since 1948, UNESCO has published translations of literary and culturally significant texts from different counties. Its collection of works from Pakistan comprises the following titles: