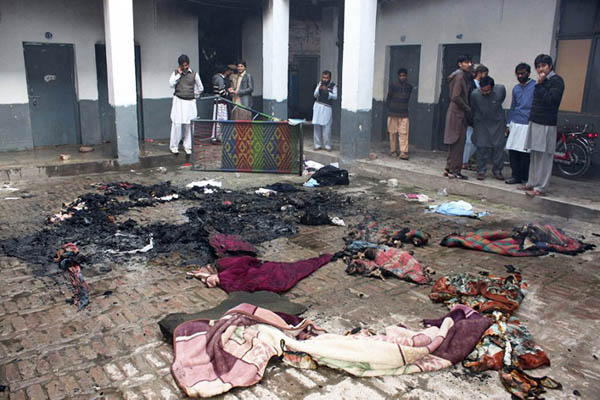 At least three students injured after IJT activists attack a Valentine’s Day event at the varsity.

At least three students were wounded Friday in clashes at the University of Peshawar, following a dispute over Valentine’s Day celebrations, police said.

Students from the left-leaning Pakhtun Students Federation were marking the international day of romance with red balloons and cake when students of the rival Islami Jamiat Taleba (IJT) group attacked them.

The IJT, the student wing of the hardline Jamaat-e-Islami party, had been celebrating Haya (Modesty) Day in response to Valentine’s Day, which they oppose as un-Islamic.

Dozens of students threw rocks in the scuffle, leading to gunshots being fired by both sides and three rooms in a student dormitory being set on fire. “The situation is under control now. Three students were wounded in the clash,” said local police official Fazalur Rehman, adding that police were searching for the students involved to arrest them. One student had a gunshot wound to his hand, he added.

Valentine’s Day is increasingly popular among younger Pakistanis, many of whom have taken up the custom of giving cards, chocolates and gifts to their sweethearts to celebrate the occasion. But many in Pakistan disapprove of Valentine’s Day as a Western import.

Badoos should be thrown out of universities. As pols are banned in education institutions,any functioning jamaat is should be rusticated. This species is against university education by definition.universities are supposed to research and increase the frontiers of knowledge. These badoos want to remain in the eighth century. They are a disgrace fo the word university.
All the lawbreakers should be booked at the police station.