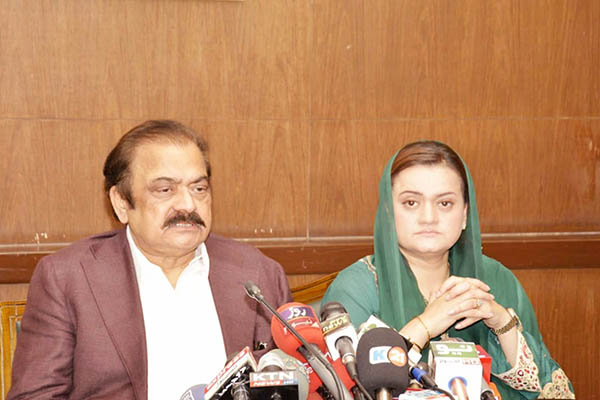 Despite the Pakistan Tehreek-e-Insaf (PTI) using its landslide win in Punjab by-polls to reiterate calls for early general elections, ruling coalition partner Pakistan Muslim League (Nawaz) has suggested it believes the National Assembly should be allowed to complete its tenure, set to end next year.

Following a meeting of the party leadership in Lahore, led by Prime Minister Shehbaz Sharif, Interior Minister Rana Sanaullah on Monday told journalists that a final decision on the renewed call for early elections would be taken after consultation with all coalition partners. “However, the PMLN’s point of view hasn’t changed—the next elections should be held after completion of the government’s tenure,” he said.

To a question, the minister said his party was willing to consider early elections—if the PTI dissolved the assemblies of Khyber-Pakhtunkhwa and Punjab under its control. He also rubbished PTI Chairman Imran Khan’s criticism of the conduct of Chief Election Commissioner Sikandar Sultan Raja, saying the government believed they had ensured transparent polling in the Punjab by-elections.

According to sources who attended the meeting, PMLN workers briefed the prime minister on the reasons for the PMLN’s defeat on 16 of the 20 seats of Punjab Assembly in the by-polls. They said the primary reasons cited were the PMLN’s decision to award tickets to PTI defectors; unpopular decisions that have provoked inflation; and an inability to ensure unity on support for the new party members.

The sources said the party had also discussed various means to ensure Hamza Shehbaz remains chief minister—an unlikely prospect as the PTI-PMLQ combine commands 188 votes of the 186 needed—with Sanaullah saying the situation could change if “five to seven PTI lawmakers don’t come to the assembly on voting day.” It is unclear if this would mean the PMLN plans to detain some of the PTI’s lawmakers or is willing to offer them deals, as it did the earlier defectors.

Information Minister Marriyum Aurangzeb, who accompanied Sanaullah, said representatives of the ruling coalition would meet on Tuesday (today) in Lahore to discuss their future strategy. “The leadership of these parties will deliberate on important and national issues,” she said, adding that PMLN chief Nawaz Sharif would also attend the meeting from London via video-link.

According to local media, Nawaz Sharif, PPP’s Asif Zardari and JUIF’s Maulana Fazlur Rehman all spoke to each other after the by-polls and agreed to defer any decision on early general elections till all allied parties could be consulted.

Also on Monday, the PPP convened a meeting of its central executive committee, with the participants stressing that the National Assembly should be allowed to complete its term to achieve “crucial electoral reforms and constitutional amendments.”

Participants of the meeting said some among the PPP had advocated early elections but the majority believed the PTI’s demands should not be catered to. “The PPP is very clear that this [National] assembly should complete its term,” Sindh Information Minister Sharjeel Inam Memon told reporters after the meeting, adding this would allow Parliament to undertake necessary legislation. To a question, he said the PPP would “never” betray its allies, regardless of the results of Punjab by-polls. “We believe that any political challenge can be met with unity and harmony among the saner political entities,” he said. “The Punjab by-polls have exposed all the lies of Imran Khan. He should apologize to the chief election commissioner for leading a propaganda campaign against him,” he added.