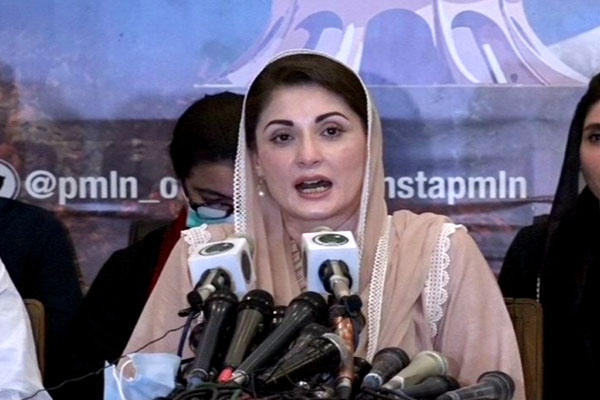 Punjab police and workers of the Pakistan Muslim League (Nawaz) clashed outside the National Accountability Bureau (NAB) office in Lahore on Tuesday, resulting in dozens of workers being arrested.

Maryam Nawaz, a vice-president of the PMLN, had been summoned by NAB to record a statement over allegedly “illegally” acquiring land in Raiwind. As she proceeded toward the office, hundreds of PMLN supporters on foot and in cars formed a caravan and gathered outside the building on Multan Road.

Footage broadcast by television and shared on social media showed plainclothes men pelting stones at police officials, who were in turn seen assaulting protesting PMLN workers with batons, water cannons and tear gas. On her Twitter page, Maryam shared a video of her car being pelted with stones by men wearing police uniforms, adding that the windshield of her bulletproof car had been shattered.

Additional footage showed a few cars purportedly part of the PMLN caravan arriving with bags of stones, with the government claiming this proved the opposition wanted to force a confrontation. The PMLN has denied that these cars were part of its caravan.

After Maryam arrived at the office, NAB reportedly informed her that because of the violent clashes, it would not question her today. While initially refusing to leave—and demanding that the anti-graft watchdog hear her testimony after summoning her—Maryam finally left the premises after receiving written confirmation that NAB had postponed the appearance.

According to the PMLN, police then arrested more than 50 party workers who had been at the location. The party has said that it would ensure all the arrested workers were provided legal representation to ensure their quick release.

Addressing a press conference after the clashes, Maryam slammed the government, claiming it was “scared” because the PMLN’s popularity was once again on the rise. “This is a moment of introspection for the ‘selected’ government,” she said, claiming the government had not expected this many people to come out in her support and the large crowds had caused them to panic.

Terming the clashes a form of “state-sponsored terrorism,” she alleged her supporters were tear gassed and pelted with stones but did not waiver. “I salute them,” she said, adding she also wanted to thank her guards.

She vowed to continue her efforts and stressed that there was no internal rift within the PMLN. “We are all united under the leadership of Nawaz Sharif,” she said, as she also hit out at the government for using her father’s health as a means of “political point scoring.”

In a press conference, Punjab Law Minister Raja Basharat said the government would act in accordance with the FIRs filed by NAB, adding that cases would be filed against anyone who had damaged government property or injured police officials. He reiterated that the PMLN had brought the stones itself and alleged that “fake license plates” had been used to hide the identities of the guilty parties.

Punjab Information Minister Fayyazul Hasan Chohan, meanwhile, claimed Maryam had hired the crow for Rs. 1,000,000 but was unable to offer any proof of his claims. He further alleged that there was a rift within the PMLN, and claimed Maryam and her uncle, PMLN President Shahbaz Sharif, did not agree on the party’s direction.

In its statement, NAB claimed Maryam had been summoned in her “personal capacity” and not as a political leader. It claimed “she displayed hooliganism in an organized manner through PMLN workers by pelting stones and creating disorder,” and alleged that this was the first time in 20 years that the NAB’s office had been attacked.

The anti-graft watchdog said it was “immediately suspending Maryam’s appearance,” and that it “strongly condemned that PMLN workers and various miscreants had tried to interfere in legal proceedings in an organized manner.” The statement also cited NAB Chairman Javed Iqbal as deciding to file charges against PMLN leaders and workers for “interfering with the state’s work.” It claimed NAB had no connections to any political party, adding that it merely acted in accordance with law.