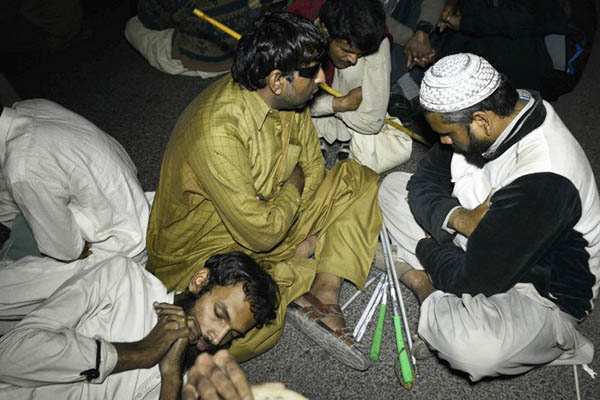 Protesters were demanding fair employment under a government-allocated quota for disabled persons.

Punjab police in Lahore on Wednesday baton charged dozens of blind people protesting against the government for failing to implement an official quota for government jobs.

A group of up to 70 blind men had gathered in front of the Lahore Press Club around noon on the International Day for Persons with Disabilities, demanding the government uphold its two percent quota for the handicapped. After hearing that President Mamnoon Hussain was visiting the city, they began to walk toward Governor’s House, leading to the clash with police.

Television footage showed police in riot gear repeatedly striking protesters with batons as some fell to the ground.

Local police station chief Rafiullah said that police did not beat up protesters but had to “push” them away from a main road where a security detail had been deployed for the president’s motorcade. “As [a] last resort police had to push them away from the road due to security reasons,” he said.

Afzal Mohiuddin, a 30-year-old blind man who had travelled from Faisalabad for the protest, said the police used excessive force. “Police beat us with sticks and pushed also and many of us fell on the ground,” he said, adding that he had been unemployed for many years and came from a poor family. “We are not demanding any favor but our right to employment,” he said.

Punjab police have become notorious for their sometimes heavy-handed response to situations. In June, police in Lahore fired on a gathering of anti-government cleric Tahir-ul-Qadri supporters, killing 14.

Pakistan is home to almost two million blind people, according to the Fred Hollows Foundation, an Australia-based blindness charity, with more than half afflicted due to preventable diseases like cataracts. They are often forced to deal with societal taboos surrounding disability and have little in the way of government facilities to aid them in public spaces.