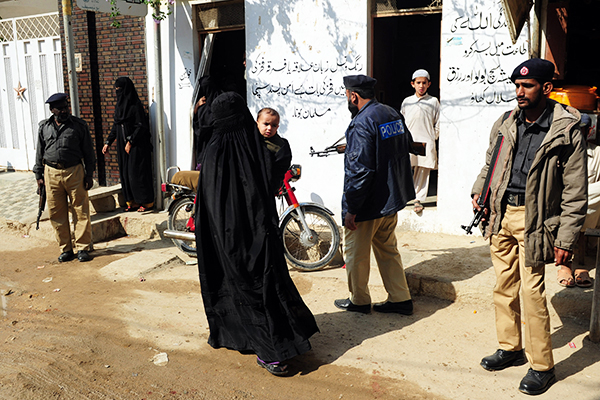 A woman takes her child for vaccination in Karachi, Jan. 8. Rizwan Tabassum—AFP

Attacks on health workers in Pakistan’s northwest and in Karachi have claimed 21 lives since December.

One policeman was killed and another wounded on Wednesday after two men on a motorcycle opened fire on the polio-immunization team they were protecting.

The incident took place in the Par Hoti area of the Khyber-Pakhtunkhwa city of Mardan. The three health workers—two women among them—who were unscathed, were midway through their three-day campaign to administer polio vaccination drops to Mardan’s children.

No group has yet stepped forward to claim responsibility for this latest attack on health workers.

Since December, attacks on the anti-polio drive in the northwest and in Karachi, a city in thrall of Al Qaeda and the Taliban, have claimed at least 21 lives.

Pakhtuns make up some 15 percent of the country’s population but account for three quarters of polio cases, according to the World Health Organization. The last attack on health workers also happened in Mardan, on Feb. 26, when a policeman escorting them was gunned down. In January, two health workers, a policeman, and seven members of a charity organization involved with polio vaccinations were killed in three separate incidents in the province. In December, attacks in Khyber-Pakhtunkhwa and Karachi claimed the lives of nine health workers.

The nationwide polio campaign was stopped immediately after the December attacks and was restarted, without fanfare, weeks later.

Pakistan is one of only three countries where polio still poses a problem. Health workers in the other two countries—Afghanistan and Nigeria—have also come under attack. In Pakistan, Al Qaeda and Taliban, and indeed regular citizens, came to view the vaccination campaign with great wariness after it was misreported that Dr. Shakeel Afridi used one such campaign to help the CIA pinpoint the whereabouts of Osama bin Laden. Afridi ran an anti-hepatitis campaign. He was imprisoned shortly after bin Laden’s killing in May 2011 and has been charged with treason.

The Afridi ruse led the Pakistani Taliban to banish the campaign from South Waziristan. They also warned locals against helping any nongovernmental or charity organization. “Hundreds of our innocent children, women, and old men have fallen prey to [drone] attacks,” the Taliban said in a statement last year. “Drones are more dangerous than polio.” The Taliban questioned the motives of the “U.S. government” funding Pakistan’s vaccination drive with “millions” while it was simultaneously waging war with drones.

Pakistan’s efforts to eradicate polio, aided by a volunteer army of some 225,000 health workers, are supported by UNICEF, WHO, Rotary International, the Bill and Melinda Gates Foundation, and the Riyadh-based Islamic Development Bank.