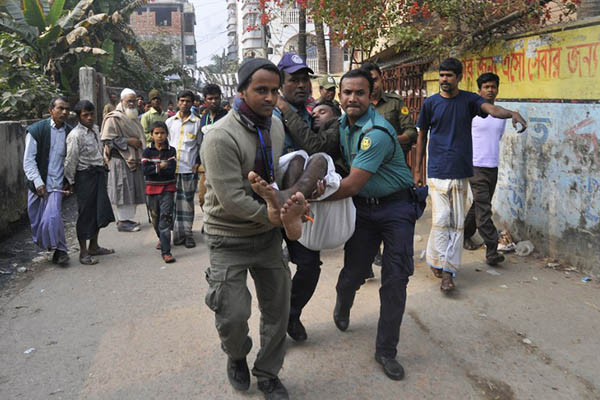 A voter injured by a crude bomb. AFP

Thousands of protesters firebombed polling stations and stole ballot papers as deadly violence flared across Bangladesh on Sunday during a walkover election boycotted by the opposition.

Police said at least 11 people had been killed since late Saturday and more than 200 polling stations were set on fire or trashed by mobs in a bid by the opposition to wreck the one-sided contest. Two of those killed were beaten to death while guarding polling stations in northern districts, which bore the brunt of the violence and are regarded as opposition strongholds.

“We’ve seen thousands of protesters attack polling booths and our personnel at a number of locations with Molotov cocktails and petrol bombs,” said Syed Abu Sayem, police chief of the northern Bogra district. “The situation is extremely volatile,” he added after describing how thousands of ballot papers had been ceremoniously set on fire.

Most of the other victims were opposition activists who were shot by police, while a driver died of his injuries from a Molotov cocktail attack on his truck. “We were forced to open fire after thousands of them attacked us with guns and small bombs,” said Mokbul Hossain, police chief in the northern Parbatipur town. “It was a coordinated attack. They managed to seize some ballot papers and they were also trying to steal our weapons.”

In the capital, police confirmed at least two petrol bomb attacks on Dhaka polling stations. Tens of thousands of troops were deployed across the country after around 150 people had been killed in the build-up, but they failed to stem the bloodshed.

The ruling Awami League has accused the main opposition Bangladesh Nationalist Party (BNP) of orchestrating the violence, and has kept its leader under de facto house arrest. With the opposition trying to enforce a general strike as part of a strategy to wreck the polls, officials admit turnout could be worse than the previous low of 26 percent in a rigged 1996 election.

AFP correspondents said there were no queues to vote, while local television reported that only a single person voted in the first three hours at one station.

The outcome of the contest is not in doubt as voting is taking place in only 147 of the 300 parliamentary constituencies. Awami League candidates or allies have a clear run in the remaining 153.

The BNP, the largest of 21 parties who are refusing to take part, has called them a “scandalous farce.” Its leader Khaleda Zia has been confined to her home for the last week, with riot police and water cannons posted outside her Dhaka residence. Zia says any polls overseen by her archenemy Hasina will not be fair, calling instead for them to be organized by a neutral caretaker government.

Those who did vote showed little enthusiasm. “I don’t really want to vote as I don’t think it’s a proper election with only the ruling party candidates participating,” Anwar Hossain said outside a polling station in Dhaka’s Azimpur neighborhood. “But I am scared about what might happen if I don’t as the candidates might think I am anti-Awami League.”

Shopkeeper Niyamat Ullah said it was a pointless exercise. “I am not going to vote,” he said. “What kind of election is it when there’s only a handful of voters at the polling center and the two candidates are from the same party?”

With the opposition charging that the election lacks credibility, analysts warn it will likely fuel violence after the bloodiest year of unrest since Bangladesh broke free from Pakistan in 1971. The former East Pakistan is the world’s eighth most populous nation but also one of the poorest in Asia, and more turmoil will undermine efforts to improve the lot of its population of 154 million—a third of whom live below the poverty line.

A local rights group says more than 500 people have been killed since January 2013, including victims of clashes that erupted after the conviction of leading Islamists for crimes dating back to the 1971 war. The courts have banned the main Islamist party from participating in the elections, and its leaders are either in detention or have gone into hiding. Alarmed by the violence, the United States, European Union and Commonwealth all declined to send observers.