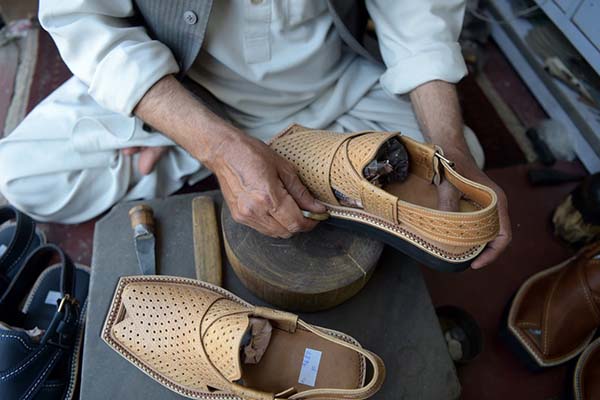 A post on Louboutin’s Instagram last month announcing the release of the shoe sparked a social media frenzy in Pakistan, with fans praising the latest homage to the country’s rich artisan traditions—and critics rolling their eyes.

The “Imran”—a flamboyant sandal complete with metal studs along with splashes of orange and silver—is inspired by the country’s traditional Peshawari chappal, according to the fashion house. The chappal has long been a staple for ethnic Pashtuns—from ordinary laborers to the country’s political elite—in Pakistan’s northwest.

The sandal is distinguished by its overlapping leather strips that cover the foot and has a small heel with a hardy rubber sole.

Louboutin’s version was named after famed Pakistani contemporary artist and friend of the designer, Imran Qureshi.

While most celebrated the shoe’s debut, others jeered at the thought of paying designer prices—Louboutins often retail for upwards of $500—for the ubiquitous sandals, which can cost as little as $5.50 in Pakistan.

Some social media users also suggested that the European brand was the latest perpetrator of cultural appropriation. “Highly recommend asking your friend to rename it though, so that it doesn’t become another culturally appropriated thing,” wrote Instagram user Mehreenfkhan under a post by Qureshi about the shoe.

Louboutin later removed the Instagram announcement, saying the sandal was just the latest creation expressing his “love for embellishments from different cultures” and was sorry some people felt “offended.”

“My designs often pay tributes to artisanship, craftsmanship, traditions or various cultures,” Louboutin said in a statement. “The world and its diversity has always been the core of my work.” 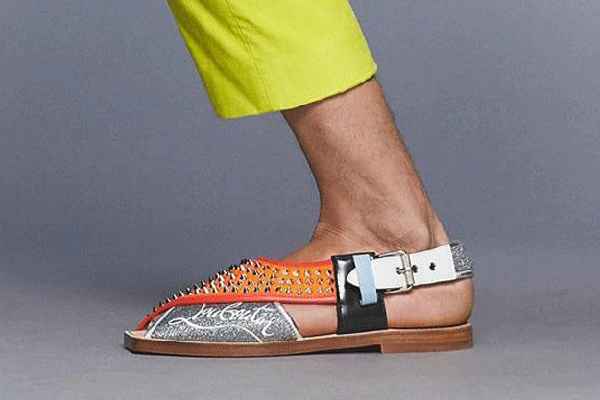 The chappal is no stranger to controversy. In 2014, British designer Paul Smith released a sandal that looked strikingly similar to the chappal with no initial mention of the Pakistani shoe, sparking fiery protests online and in the press in Pakistan.

Pakistani fashion designer Kamiar Rokni praised Louboutin’s latest creation, saying claims of cultural appropriation were misplaced in this instance. “When you visit different parts of the world, you do get inspired… and that seeps into your design,” said Rokni. “There’s nothing wrong with somebody being inspired by the Peshawari chappal,” he explained.

Far from the shoe boutiques of Paris, chappal makers and wearers in Peshawar greeted the arrival of the “Imran” with bemusement, pride, and some confused shrugs. “I’m totally amazed,” said Ghazan Khan—a self-proclaimed chappal fanatic who has bought more than 20 pairs of the sandals in recent years alone.

“People are getting addicted to this kind of chappals, so it’s good,” he added, while suggesting that local designers deserved a cut of the profits from the “Imran.”

“[The chappal] is long-lasting and comfortable,” said resident Abdul Rehman, adding that the sandal’s ventilation helped keep the foot cool in the area’s stifling heat. “I have been wearing chappals for all of my life and never used any other shoe,” he added.

The shoe’s popularity had been in decline for years, according to chappal makers in Peshawar, as the country’s youth adopted more modern footwear tastes.

The trend was only reversed with the political ascent of former World Cup cricketing captain Imran Khan and his fondness for the shoe, spotlighted as he led mass protests in 2014. Khan’s adoption of the chappal was part and parcel of a makeover the former cricketer and playboy has embraced since retiring from the sport, taking on a pious image in Pakistan to accompany his crusading populist agenda.

The ploy has largely succeeded, with Khan elected prime minister last year on promises to reign in corruption and cut back on excessive spending, while chappal sales have boomed as the youth seek to imitate the country’s new, stylish leader.

“I made chappals for Imran Khan when he was holding the protests in Islamabad… that’s why it has become famous and people overwhelmingly like them,” explains Chacha Noor Din—the owner of a string of shoe stores in Peshawar—who counts the premier as a loyal customer and named a version of the shoe after him. And while the chappal’s popularity continues to thrive in Peshawar and throughout the country’s northwest, fans of the traditional sandal are less convinced by Louboutin’s new take.

“I will not wear this shoe because it’s a ladies shoe,” said Riaz-u-Din after looking at a picture of the “Imran” on a phone as he shopped for a pair of chappals. He insisted: “No one will wear it here in Peshawar.”