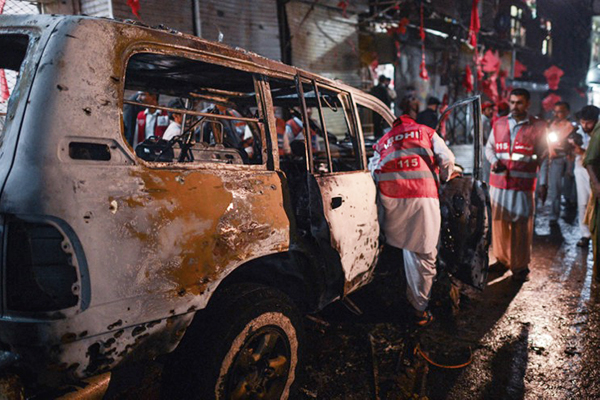 Amnesty International called on Pakistan on Thursday to investigate a wave of attacks and threats against politicians and election workers that has marred the run-up to next month’s elections, scheduled for May 11, for the national and provincial assemblies.

“This has been a particularly deadly election period marked by an alarming surge in attacks and intimidation of political activists and election officials,” said Mustafa Qadri, Amnesty’s Pakistan researcher, in an open letter. Amnesty said at least 37 people had been killed and 183 injured in attacks on election officials, party representatives and supporters countrywide.

At least 16 people were killed on Terror Tuesday, April 16, with attacks reported in three of the country’s four provinces. That day’s worst attack took place in Peshawar at an Awami National Party rally, apparently targeting Haroon Bilour, the son of Bashir Bilour, who was assassinated by the Pakistani Taliban on Dec. 22.

The Taliban have directly threatened the three main parties in the outgoing government: Pakistan Peoples Party, ANP, and the Muttahida Qaumi Movement. These parties are often described as secular and pro-U.S. As a result of the threats there have been few large-scale political rallies from these parties, the campaign trail being occupied almost exclusively by former prime minister Nawaz Sharif’s Pakistan Muslim League (Nawaz) and Imran Khan’s Pakistan Tehreek-e-Insaf. The MQM announced yesterday that it was closing down its election offices in its stronghold of Karachi, a city occupied by the Taliban. The PPP’s campaign is largely restricted to paid advertisements on the country’s cable news channels and newspapers.

“With these deliberate attacks, the Taliban and other armed groups have shown flagrant disregard for human rights, including the rights to life, freedom of expression, and freedom of peaceful assembly,” said Qadri. Amnesty International said the authorities must ensure adequate protection and protect freedom of expression, peaceful assembly and association, and the right to life. “Candidates themselves also have a responsibility not to incite violence against rivals or segments of society such as religious minorities,” said Qadri.

Amnesty International also urged political parties and their candidates to make human rights a priority in their election pledges and policies. It said some advances had been made in passing legislation by the outgoing Parliament, but said rights abuses by state and nonstate actors have in some respects worsened over the last five years.

Journalist Amir Mir has recently reported that at least 55 men on the country’s terrorist watch-lists have been cleared by judges to contest the upcoming elections. The men and women running against these 55 men with alleged links to terrorism have voiced concerns about being able to conduct fear-free campaigns.