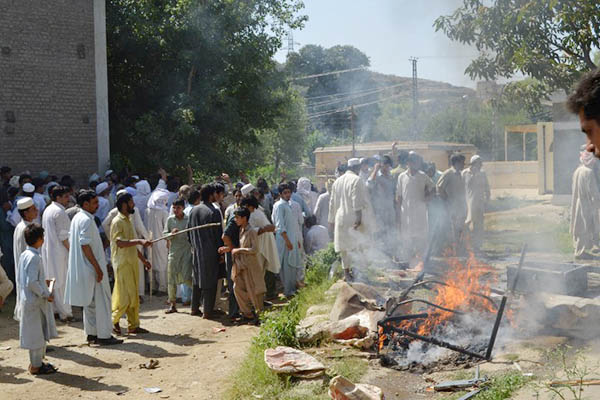 At least one person killed, eight others injured as residents of Khyber-Pakhtunkhwa province demonstrate against load-shedding

Violent protests erupted in Khyber-Pakhtunkhwa province on Monday as crippling electricity cuts left hundreds of thousands of people without power in soaring temperatures during the first two days of the holy fasting month of Ramzan.

At least one person was killed and eight wounded in Khyber-Pakhtunkhwa province after police opened fire on hundreds of people protesting at the cuts by trying to set a power station ablaze, officials said. “The protesters first tried to torch the electricity power station and then they attacked a police station,” Zafar Ali Shah, a senior government official in Malakand district, told AFP, adding that the demonstrators also attacked government buildings, offices and vehicles.

Protesters later blocked a main highway linking Malakand and the Swat valley to the rest of the country, Shah added, saying that authorities are negotiating with local leaders to defuse the demonstrations.

Pakistan has for years been struggling to provide enough power for its nearly 200 million citizens. Its chronic energy crisis sees daily power outages, which are amplified in the summer heat.

Residents in Peshawar said they face cuts for six to eight hours a day, while rural areas can receive electricity for as little as three to four hours a day.

Prime Minister Nawaz Sharif has vowed to solve the crisis by 2018, when elections must be held. On Monday he said that “minimum load-shedding” should be carried out during Ramzan, during which millions of devout Pakistanis abstain from food and drink from sunrise to sunset.

Temperatures in Pakistan touched near-record highs over the weekend.

On Sunday angry residents burned tyres in the roads in the sweltering city of Karachi after a massive power outage in southern Pakistan. Water distribution—already unreliable in the megacity of some 25 million people—is reliant on the electricity supply, leaving thousands unable to drink, cook or wash ahead of the first day of fasting.

Authorities said the power outage extended to more than a dozen districts in the southern province of Sindh of which Karachi is the capital, where temperatures topped 40 degrees Celsius.