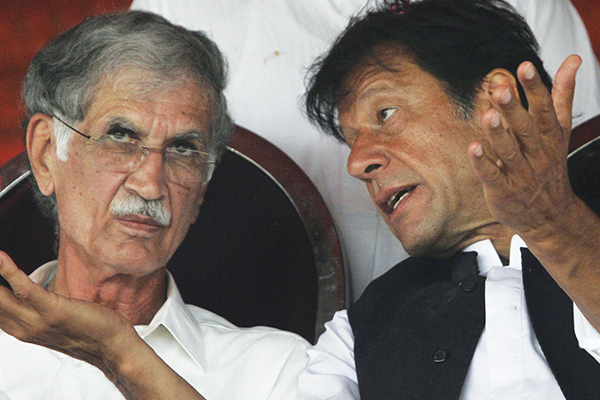 Defense minister and senior Pakistan Tehreek-e-Insaf leader Pervaiz Khattak on Sunday accused the Election Commission of Pakistan (ECP) of “facilitating” the Pakistan Muslim League (Nawaz) in the PK-63 (Nowshera) by-polls, claiming the ruling party had “evidence” to prove this.

Addressing a ceremony in Pahari Katikhel, he claimed that the PTI, and not the PMLN, had actually won the seat in the Khyber-Pakhtunkhwa Assembly. Curiously, on Monday afternoon, Information Minister Shibli Faraz appeared to rebut these claims by declaring that the PTI had “set a new precedent” by accepting its losses in the by-elections.

“The PTI has not raised questions about the polls in any district it has lost,” claimed Faraz, revealing confusion within the ruling party’s ranks on how to respond to a string of by-poll losses nationwide, the bulk to representatives of the opposition’s Pakistan Democratic Movement alliance.

During his speech, Khattak claimed that he would share details of the alleged rigging in PMLN’s favor with the media today (Monday). He alleged that the ECP had aided the PMLN in defeating the PTI’s Mian Mohammad Umar Kakakhel.

On Saturday, Special Assistant to the C.M. on Information Kamran Bangash claimed the Khyber-Pakhtunkhwa government had removed Khattak’s brother Liaquat Khattak from the provincial cabinet as irrigation minister over his involvement in the PK-63 defeat. “Liaquat Khattak was removed for supporting the PMLN candidate in [by poll],” claimed Bangash, adding that the decision had been taken after consultation with Prime Minister Imran Khan.

Separately, unofficial results showed the PPP defeating the PTI in by-polls for Tharparkar’s NA-221 seat, retaining the constituency for a third consecutive time.

The PPP has declared the victory proof of the public rejecting the PTI—as it had already claimed in other by-elections that were also secured by it. In a statement, PPP Chairman Bilawal Bhutto-Zardari said the people of Tharparkar had rejected the “illegal and incompetent” rulers, adding that the “selected regime” had failed to secure any additional seats in by-elections, showing the failure of its policies.

He vowed that the momentum would continue in the Senate elections and the opposition would emerge victorious in those polls as well.