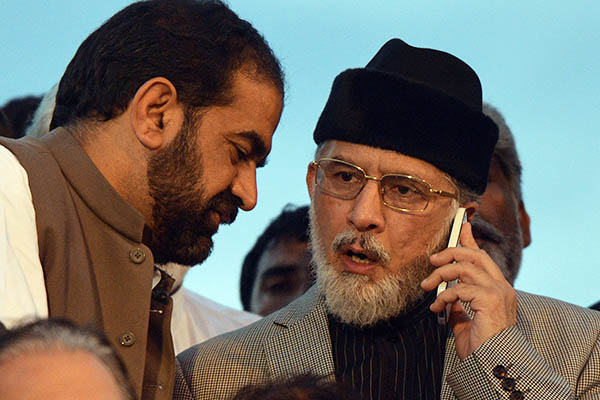 Prime Minister Nawaz Sharif on Friday denied reports that his Pakistan Muslim League (Nawaz)-led government had requested the Army chief meet Tahir-ul-Qadri and Imran Khan and negotiate an end to the ongoing standoff outside Parliament.

“I was with [interior minister] Chaudhry Nisar when representatives of PAT [Pakistani Awami Tehreek] and PTI [Pakistan Tehreek-e-Insaf] called and requested my permission to speak with the Army chief,” he told Parliament. “I immediately told them they were free to met him if they wanted to,” he added.

“The security of the ‘Red Zone’ is the responsibility of the Army under Article 245, and they had to play their role in ensuring chaos does not spread in the capital,” said Sharif. He said he had not acquiesced to the military to protect his government, as alleged by the protesters.

“I am willing to sacrifice even 10 more governments for the principled stance taken by my government for democracy,” he said. He also praised slain former prime minister Benazir Bhutto and lauded Opposition Leader in the National Assembly Khursheed Shah for a speech condemning the protesters.

Shah, a Pakistan Peoples Party parliamentarian, expressed his party’s solidarity with democracy, saying: “All political forces will stand with the government against any unconstitutional move.” He praised Pakistan’s armed forces for their role in ensuring law and order, but slated the protesters for trying to provoke unrest.

“They [protesters] are spreading terrorism in the name of democracy. A few thousand people cannot impose their decision over Parliament,” he added. “Last night, many people who believe in democracy couldn’t sleep properly because they feared the military was about to intervene in the country’s political process,” he said. “I urge you [Sharif] to stand your ground,” he thundered. “Let them come. If they want to burn Parliament, let them. If they want to burn Pakistan, let them,” he said. “I urge ISPR to clarify today that the PTI and PAT approached them at their request,” he said, adding, “We will not allow our institutions to be pressured by such people.”

Earlier, Interior Minister Chaudhry Nisar Ali Khan told the National Assembly that the protesters were set on provoking bloodshed in Islamabad to achieve their unconstitutional demands. “No one can pressure the prime minister into resigning, nor will Parliament allow anybody to do the same,” he said. “No one can demand the prime minister resign over the registration of a criminal case against him before a proper investigation has been conducted,” he added, referring to the First Information Report registered against Sharif, his brother and Punjab Chief Minister Shahbaz Sharif, and 19 others for their alleged roles in the deaths of at least 10 PAT workers in Lahore on June 17.

Nisar assured Parliament that the government would not take any unconstitutional steps against the protesters, and said the protesters were taking Pakistan back to the Stone Age by trying to enforce mob rule. “A few thousand people protesting in Islamabad cannot justify their claim for the dissolution of government,” he added.

The interior minister said the protesters had claimed they did not trust other political parties or the judiciary for talks and had demanded to speak to the military as a mediator. “The Army chief did not offer to conduct talks. He talked to Imran Khan and Tahir-ul-Qadri after the P.M. gave him permission to do so at their [protesters] request,” he added.

However, PAT leader Qadri denied this in a speech to his supporters shortly after the National Assembly address. The cleric claimed the government officials had lied and he had not requested any meeting with the Army chief. “The P.M. should resign for lying to the people,” he thundered, claiming the media could corroborate his claims because they had reported on the government approaching the military.

It is just disgusting that the government is spreading lies to discredit the duo of Imran Khan and Tahirul Qadri. The Prime Minister requested the Army Chief in a meeting between the two. to mediate or facilitate the negotiations to find a solution to the CRISIs. But next day it refuted the reports after 24 hours of the circulation of the story.

The government has lost all moral authority to govern. They put the blame on the duo It is just unbelievable. There is no truth in this allegation . Dr. Qadri and Imran Khan leaders of the PAT and PTI never asked for meeting or any negotiation. THe D.G ISPR’s tweet has clarified the position. It was indeed the Prime Minister, who asked for the facilitation by the Army Chief.The government’s claims are ridiculous and absurd and ridiculous, We denounce the rulers for lying and playing games in the name of facilitation..