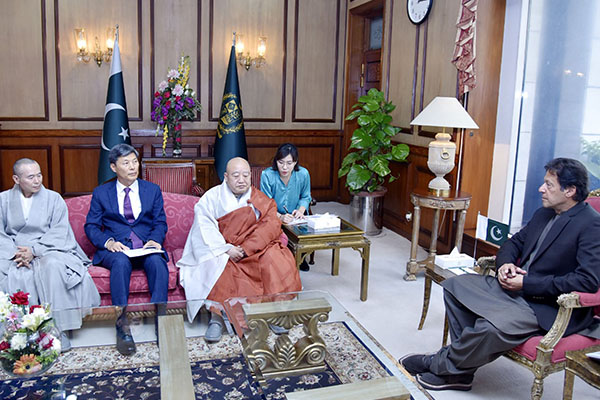 Pakistan is proud of its Buddhist heritage and the Pakistan Tehreek-e-Insaf-led government is dedicated to promoting religious tourism as part of its efforts to respect its history, said Prime Minister Imran Khan on Wednesday.

During a meeting with a delegation of Buddhist monks led by Most Venerable Won Haeng, the president of the Jogye Order—the biggest denomination of Buddhism in South Korea—Khan said Pakistan was committed to promoting inter-faith harmony and respect for all religions.

The prime minister said Pakistan and South Korea should enhance their collaboration for the conservation and promotion of historical Buddhist sites, adding his hope that this delegation’s visit would convey the common message of peace, harmony and understanding among all religions. He also hoped the Jogye Order’s visit would promote people-to-people contacts by highlighting the historic cultural and religious linkages between Pakistan and South Korea, going back to the Buddhist Gandhara civilization.

During the meeting, Imran Khan also said Pakistan was the cradle of civilizations, making it a revered and natural destination for the followers of three major religions: Buddhism, Sikhism and Hinduism.

The Most Venerable Won Haeng, during the meeting, lauded the efforts of Pakistan for preserving Buddhist heritage sites and said he would encourage more religious pilgrims to visit the country. He also thanked the prime minister for “promoting world peace and inter-faith harmony.”