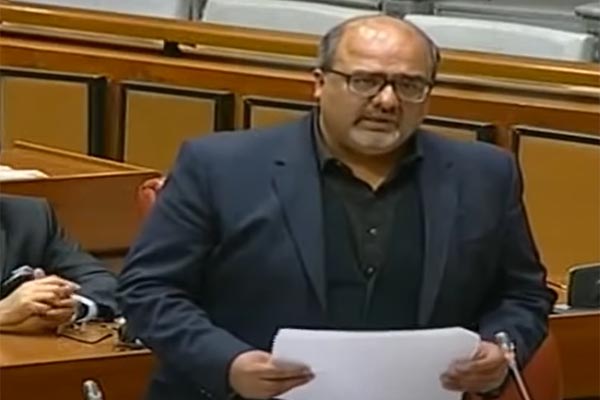 The Pakistan Tehreek-e-Insaf-led government on Monday sought to dismiss allegations of the National Accountability Bureau (NAB) perpetrating human rights violations against suspects, including reports of over a dozen individuals dying in its custody.

Prime Minister’s Adviser on Accountability Shahzad Akbar told the Senate that 10 of the individuals named by Deputy Chairman Saleem Mandviwalla as having been “allegedly killed while in NAB custody” had died while under judicial remand. “During judicial remand the accused remains in prison and not under the physical custody of NAB,” claimed Akbar. Providing details, he said Omni Group Chief Financial Officer Aslam Masood had died in Adiala under judicial custody, while Brig (retd.) Asad Munir had never been arrested and died at home. “It was unjust to link the deceased [Munir] with NAB,” claimed the adviser.

Admitting that two individuals—PTCL Divisional Engineer Agha Mohammad Sajjad and Zafar Iqbal Mughal, allegedly involved in a housing scheme scam—had died in NAB custody, Akbar claimed there were no allegations of torture against them.

The adviser to the P.M. also continued the PTI’s claims of the opposition desiring changes to the NAB law that would benefit them. He said the law had already undergone judicial scrutiny—but failed to respond to court rulings slamming NAB as a tool of political victimization. He said the Supreme Court, in its judgement in the Abid Memon case, had held that 90-day remand was not in violation of Section 10(2) of the Constitution, adding the power of arrest under Section 24 of the NAB Ordinance had also been validated by the court.

Akbar alleged that the opposition’s primary issue with NAB was “improved performance,” claiming that that recoveries in the past two years had exceeded those of the previous 10 years combined. “This … is just because there is no political interference now,” he claimed. He said Pakistan was not the only country to have a central institution against corruption, adding India, Malaysia, South Africa, Kenya and Singapore all had similar legislation.

The adviser maintained that assets beyond sources of income was an offense in almost all the countries of the world, and noted that 12 offenses under NAB’s jurisdiction placed the onus of proof on the accused. He reiterated the government’s claim that it was ready to reform the accountability law, but ruled out any legislation that directly benefited any individuals.

Prior to Akbar’s defense, opposition lawmakers had slammed NAB for political victimization and questioned how people involved in the sugar, wheat and medicine scams were sitting in the federal cabinet without any penalty.

In his speech, Mandviwalla claimed NAB was “beyond anyone’s control” and demanded that it be scrutinized because “everyone is accountable and no one is above the law.” He said he had received over 100 complaints against the anti-graft watchdog, adding that federal bureaucrats had even told him they no longer wished to do any work because of NAB’s harassment.

He demanded the verification of educational degrees and domiciles of NAB officials, as well as scrutiny into their assets and the manner they had been inducted. “What is the fear which prevents investigations against NAB,” he asked.

Mandviwalla alleged that “many people” had died while in NAB custody. “I have had meetings with the families of those who passed away in NAB’s custody and I will meet them again. People who have been imprisoned are writing letters to me to help them get justice,” he said, alleging former Controller General of Accounts Khurram Humayun had committed over NAB’s filing of a corruption reference against him.

Speaking about his personal experience with NAB, the deputy chairman said when he was investigated for benami transactions, all his interviews were recorded. “I demand them to hand the footage over to media so that everyone could see what actually happened,” he said.

He said that if the courts ever convicted him, he was ready to submit to their ruling. “It is not about me, but we have to do something about NAB’s behavior for the sake of this country,” he added.