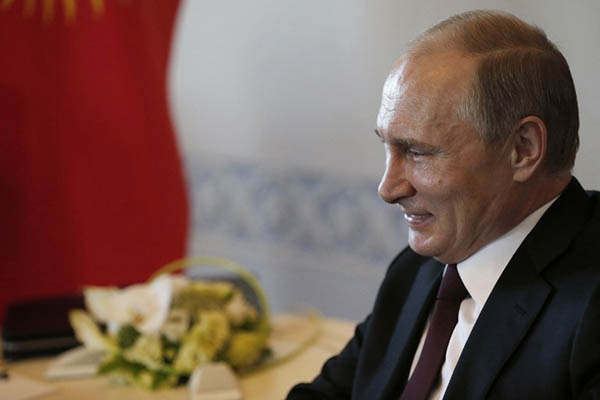 Russian president was out of the public eye for 10 days, prompting reports that he was unwell.

Russian President Vladimir Putin on Monday dismissed days of frenzied “rumors” over his health and whereabouts as he appeared in public after an unusually long 10-day absence.

“We would be bored if there were no rumors,” Putin said at a meeting with Kyrgyz President Almazbek Atambayev at the sumptuous Konstantinov’s Palace just outside Saint Petersburg. Atambayev said his Russian host had driven him around the palace before the meeting, in an apparent bid to dispel all speculation about Putin’s ill-health. “In their dreams,” Atambayev said with a smile.

The meeting with Atambayev was scheduled to start at noon but few were surprised that Putin, who is known for his tardiness, showed up two hours late.

Putin, 62, was last seen in public on March 5 at a news conference with Italian Prime Minister Matteo Renzi. Last week he cancelled a number of scheduled events including a trip to the Central Asian country of Kazakhstan and the planned signing of an alliance agreement with the breakaway region of South Ossetia.

The unusual absence from the public eye set the Internet abuzz with rumors that he was sick, had died, had been deposed in a palace coup or had once again become a father. Morbid jokes and gags spread on Russian social networks—one of the last bastions of free speech in Russia—and the hashtag #Putinumer (#Putindead) trended on Twitter.

His spokesman Dmitry Peskov was forced to fend off countless questions about each rumor, which he dismissed as “March madness.”

Peskov on Monday said Putin had driven his guest around the palace for about 15 minutes. “So everyone has now seen the paralyzed president captured by a general who has just returned from Switzerland where he was delivering a baby?” he asked sarcastically.

He said the two leaders were meeting near Saint Petersburg because Atambayev’s daughter was studying in the city. “We no longer want to talk about this. Everything is good.”