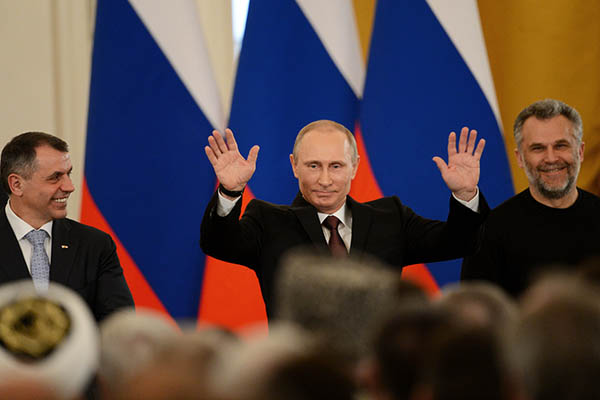 Russian president claims he has no intention of incorporating the rest of Ukraine, saying ‘we do not need it.’

President Vladimir Putin on Tuesday signed a treaty making Crimea part of Russia, in a historic redrawing of Russia’s borders after he declared that the Black Sea region has always been “in the hearts” of his countrymen.

In a fast-moving sequence of events following Crimea’s controversial secession referendum on Sunday, the Kremlin said Crimea was now considered part of Russia and no longer Ukrainian territory, shrugging off strong international objections.

“In the hearts and minds of people, Crimea has always been and remains an inseparable part of Russia,” Putin said in an emotional address broadcast on television. The move, which came sooner than expected, risks plunging the West and Russia into a crisis not seen since the Cold War and sent shockwaves through the new authorities in Ukraine who took over after the ousting of pro-Kremlin president Viktor Yanukovych last month.

Putin signed the treaty with Crimean Prime Minister Sergei Aksyonov and other Crimean leaders at a ceremony at the Kremlin attended by both houses of parliament. Lawmakers, who still have to formally ratify the treaty, broke into applause and cheers after the signing. “The Republic of Crimea is considered to be part of Russia from the date of the signing of the treaty,” the Kremlin said.

Crimea and the city of Sevastopol—the home of the Russian Black Sea fleet that has special status—are being incorporated as new constituent parts of the Russian Federation. The signing—which had not been flagged in advance—came after Putin gave a fiery address at the Kremlin seeking to justify the incorporation of Crimea into Russia. His defiant speech brushed off U.S. and EU sanctions touted as the most severe against Moscow since the end of the Cold War.

Putin said Crimea belonged with Russia and he slammed the Soviet-era decision by Nikita Khrushchev to gift the peninsula to the Ukrainian Soviet republic as riddled with “violations.”

“When Crimea suddenly ended up being in another state, Russia felt it was not simply robbed—it was plundered,” he said. He added that Russia was tired of being pushed into a corner by the West and said it had been repeatedly deceived on issues like NATO, missile defense and visa-free travel. “On Ukraine the West crossed a line,” he said, warning it against provoking Russia. “They are trying to drive us into a corner.”

But he sought to play down fears that Russia was seeking to also incorporate parts of eastern and southern Ukraine. “We don’t want the break-up of Ukraine. We do not need it,” Putin said.

The seizure of Crimea by pro-Russian forces following the ouster of Yanukovych last month has been condemned around the world. But the prospect of Russia’s international isolation did not deter an increasingly defiant Putin who based the justification for the de-facto annexation of Crimea on the region’s weekend referendum where almost 97 percent voted to split from Ukraine.

It is the first time since World War II that Moscow is expanding its borders and represents the most radical redrawing of the map of Europe since Kosovo’s 2008 declaration of independence from Serbia.

The lush Crimean peninsula has been the base of Kremlin navies since the late 18th century and only became part of Ukraine in 1954 when it was gifted by Khrushschev. With a population of some two million, Crimea has long been seen as a favorite vacation destination and has a great hold over the Russian psyche.

After the treaty was signed, the party of Ukrainian boxer-turned-politician Vitali Klitschko urged Kiev to cut diplomatic ties with Russia.

Patriotic fervor has soared in Russia, with tens of thousands expected to hold a state-supported rally in Moscow with the slogan “We are together.” Independent pollster Levada Center said Monday that two thirds of Russians—63 percent—believe Russia is a “great nation,” double the figure of 31 percent in March 1999.

Putin’s approval ratings have jumped to 72 percent on the back of the success of the Sochi Winter Olympics and his decision to send troops to Crimea following Yanukovych’s Feb. 22 ouster.

A defense ministry source said that there was relief within the navy that the future of the Russian Black Sea fleet at a Crimea base that Moscow was leasing from Ukraine was now assured. But the mood was far from jubilant among economists and businesses, who fear Putin’s policies and the threat of further sanctions will inflict lasting damage on Russia’s economy.

The European Union unveiled travel bans and asset freezes against 21 Russian and Ukrainian officials, including Vice Admiral Alexander Vitko, the head of Russia’s Black Sea fleet. “These are by far the most comprehensive sanctions applied to Russia since the end of the Cold War—far and away so,” said a senior U.S. official.

Diplomats in Brussels said EU and Ukrainian leaders would on Friday sign the political portion of a landmark pact whose rejection by Yanukovych in November sparked the protests that led to his fall.