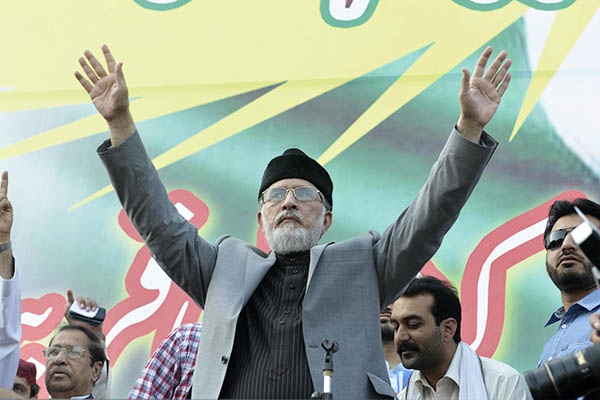 Cleric says his ‘revolution’ to overthrow the PMLN government will coincide with the PTI’s protest on Aug. 14.

Populist cleric Tahir-ul-Qadri on Sunday announced a march on Islamabad to overthrow the government, hours after being charged with murder for the death of a policeman allegedly injured in clashes with his supporters.

Qadri said he would take to the streets on the same day that opposition leader Imran Khan will hold a rally in the capital aiming to force the government to step down and hold a fresh election. Both protest rallies will be held on Thursday when Pakistan celebrates its independence day.

“Our march will begin on Aug. 14,” Qadri told thousands of his supporters in a fiery speech in Lahore, saying he would “struggle” along with Khan to topple the government. “We would struggle together and would end the kingdom of cruelty,” he said.

A spokesman for the cleric said he “will lead hundreds of thousands of people either on Aug. 13 or morning of Aug. 14 and march on Islamabad.”

Earlier police in Lahore said they had charged Qadri with murder after a constable, who was wounded in Lahore on Friday in confrontations with his followers, died of his injuries late Saturday. “A case of murder, inciting violence and treason has been registered against Tahir-ul-Qadri and his supporters,” said senior police official Zulfiqar Hameed. Police said the Canada-based cleric faced many other accusations of attempted murder as well as inciting his followers to attack police and commit terrorist acts.

Qadri rejected police accusations against him and claimed that the policeman he was charged with murdering had died in a road accident.

Violence broke out on Friday after hundreds of the cleric’s baton-wielding supporters tried to remove the shipping containers police had used to block the roads to his party headquarters in Lahore’s Model Town area. The violence continued on Saturday, mainly in Punjab province, with clashes between police and his supporters leaving two others dead including another police officer.

Shahid Mursaleen, a spokesman for Qadri and his Pakistan Awami Tehreek, alleged eight of their workers have been killed in this week’s clashes though officials place the figure at one.

Qadri, who commands tens of thousands of followers, returned to Pakistan in June to lead what he terms a “peaceful revolution,” claiming the country’s political system only benefits the elite.

Supporters, including women and children, vowed on Sunday to stay in Lahore for three days to participate in the planned march. “Stay here until revolution, this revolution means change, we are struggling for the rule of law,” Qadri told those gathered. He also urged them to be ready to act on his behalf if the government attempts to “kill” him. “If I am killed, all of you must take revenge from Nawaz Sharif and his brother [Punjab Chief Minister Shahbaz Sharif],” he said. “My followers must ensure they are both killed if I am killed.”

Police have arrested more than 500 of the cleric’s supporters in the last three days, officials said, though the group itself claims 15,000 have been detained.

Qadri held a disruptive four-day sit-in protest against the government in 2013 ahead of the election that saw Sharif come to power for a third time.

In Islamabad, police on Sunday placed shipping containers to block roads ahead of the march by Khan’s Pakistan Tehreek-e-Insaaf (PTI) party, witnesses said. Khan, who leads the third largest party in Parliament, has long complained of massive rigging in the 2013 general elections, which saw the country’s first transition of power from one civilian-led government to another.

Khan applauded Qadri’s decision to join his rally, saying that two “long marches” in the same day would pressure the government of Prime Minister Nawaz Sharif to step down and call for fresh elections. Earlier, a party spokesman had said that the PTI had decided it was “too late” for talks and would march on Islamabad on Aug. 14 regardless of the government response. “Imran Khan will share evidence of the people, including judges, who were involved in the rigging during the 2013 general elections in a press conference on Aug. 11,” said Shireen Mazari.

On Monday morning, the Karachi Stock Exchange fell by over 1,300 points in reaction to the planned rallies by Khan and Qadri. Arif Majeed, an investor, told Newsweek that investors did not trust the government to effectively handle the protests. “All the investors fear a mishap [will happen], as the government has yet to convince either Khan or Qadri to end their protests,” he said. “We don’t expect to see any improvement and the index will continue to fall until we see steps from the government to normalize the political situation,” he added.

I don’t know why word ” MARCH’ is popular in only Pakistan , however it is being changed with long or short . this is also very strange that how Qadri is ready to join hands with captain ,because he likes his own leadership like wise imran khan is a leader of personality as well . During the protests of qadri and imran khan not only the residents of lahore are restless but all our country is in unpredictable situation , as many workers have been arrested , law n order agencies are also working to normalize the situation but in my point of view , it will take time , we are facing not only inner disturbance but also struggling hard for peace in waziristan , what would u like to say about our local terrorists? and these are sorry to say our corrupt leaders( local terrorists) who don’t bother the miseries of our public …….. ,

Punjab courts work for benefit of PMLN, not for others.