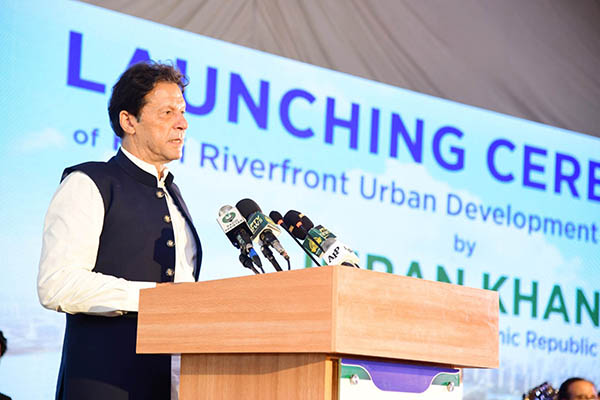 The Ravi City project is “essential” for the survival of Lahore, Prime Minister Imran Khan claimed on Friday, as he laid the foundation stone of the Rs. 5 trillion scheme.

“Today I felt great excitement in doing stone laying of Ravi City, one of the biggest mega projects we have launched in our history,” he posted on Twitter. “This will save Lahore by stopping spread of unplanned urban sprawl, raise water table and revive river Ravi, preventing it from becoming a sewerage nala,” he added.

Earlier, while addressing the ceremony, Khan said failure of the project was “not an option,” adding that the team tasked with completing the project should ignore roadblocks and focus on timelines to execute it. He said the wealth generated from such development projects would be spent on education and health of people, in line with the objectives of the incumbent Pakistan Tehreek-e-Insaf government.

He said wastewater would be treated and released into the Ravi to increase the groundwater table. A forest area has also been earmarked, he said, and six million trees would be planted to improve the environmental quality of the Punjab capital. Curiously, while hailing the horizontal development of the project on the outskirts of Lahore, the prime minister also stressed that vertical expansion of cities was vital to resolving growing urban challenges, including population growth and climate change.

Echoing earlier statements of Information Minister Shibli Faraz, the prime minister hinted that this was the best time to whiten black money, as the government would not question the source of funds for anyone investing in the construction sector prior to Dec. 30.

During his speech, the prime minister continued his habit of criticizing the previous governments while ignoring similar initiatives of his own regime. He said the PTI government had spent its first two years trying to save the country from default and from the opposition’s attempts to escape accountability. “They even offered support to the government for the passage of FATF bill as well as the Kashmir issue in return for an NRO,” he claimed despite repeated assertions from opposition lawmakers that the government is lying and they merely wanted the bill to be in line with legal requirements. The opposition voted to pass the FATF bill with the government after amendments—without any so-called NRO being issued.

Khan also criticized the Pakistan Muslim League (Nawaz) government for launching the metro bus and train projects that required subsidies of Rs. 28 billion. He did not mention the BRT Peshawar project, undertaken by the PTI-led government, that has been estimated to have cost more than all the metro projects initiated by the PMLN combined.

According to the initial plans, the proposed project site is expected to bridge the gap between Lahore’s expansion towards the west and the district of Sheikhupura.

Reiterating that there would be no political pressure on bureaucracy, he said officers should work on merit and introduce a “carrot and stick” policy in their respective departments. “I will stand by the officers who work on merit,” he said.