Rohingya Refugees Forced to Scramble for Aid in Bangladesh 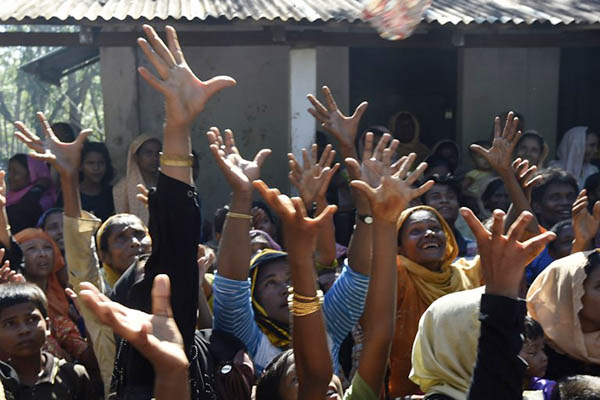 Every day Sunabhan joins thousands of other Rohingya refugees by the roadside near her settlement in southern Bangladesh waiting for aid trucks to arrive and readying herself for the desperate scramble for food.

Like most of the nearly 400,000 refugees who have flooded into Bangladesh in the past three weeks to escape violence in Myanmar, she relies entirely on handouts from local volunteers operating with no official oversight and little coordination.

Today Sunabhan, a widowed mother of four, managed to fight her way through the scrum of hungry refugees near the camp in Kutupalong and grab a bag of rice flakes. But often the 44-year-old, who arrived in Bangladesh with her family 10 days ago after fleeing the violence that killed her husband, goes away empty handed.

“There are more people than food so it is very chaotic,” said Sunabhan. “The strong ones run to the trucks and they get the food first, it is more difficult for women and children.”

The United Nations said this week there was an urgent need for a coordinated response to the massive influx of desperate people, most of whom have still had no assistance from aid agencies or the state.

Ordinary Bangladeshis have stepped into the breach, filling trucks and driving to the new settlements that have sprung up. But their distribution methods make it impossible to ensure that aid reaches those who need it most.

Each time a truck pulls up, the refugees scramble to grab the food parcels, water bottles and clothing the volunteers throw into the desperate crowd.

At times fights break out; at others, children who have clambered up the sides of vehicles, hands outstretched for food, are swept onto the street when the trucks suddenly speed off.

Food is the most prized catch, but even those giving out clothing attract a crowd. Children pick up garments that land on the muddy ground, dust them down and bundle them into empty rice bags.

One Rohingya man wearing the traditional lungi tied around his waist picks up a new-looking pair of jeans embellished with red sequins and places them on his head for protection against the sun.

Mohamad Anisul Islam, a 23-year-old Bangladeshi art student, is one of those standing atop the trucks throwing out aid. He insists his government is doing all it can for the refugees, but says he wants to help with the desperate situation.

“Their condition is miserable. They have no food, no home, none of their basic human rights are being met,” he said. “We already have a big population in Bangladesh and we want them to go home, but while they are here we want to help.”

Vivian Tan, spokeswoman for the U.N. refugee agency, said the government was now trying to set up drop-off points for aid distribution due to concerns over the current ad-hoc arrangements. “It reflects the generosity of the Bangladeshi public but did raise concerns about the safety of the refugees rushing for aid being tossed off trucks,” she said. “The sheer scale of this growing influx and the fact that they are scattered in different locations—camps, makeshift sites and local villages—make it hard to know where they all are and to reach them all equitably.”

Bangladesh’s Prime Minister Sheikh Hasina said the army would be deployed to distribute aid, while Lieutenant Colonel Rashidul Hasan told AFP on Friday the orders had reached the crisis zone. “We’ve got the directive that the army would receive relief materials sent by foreign nations at the airport and take it to Cox’s Bazar,” he said.

For years Bangladesh restricted the U.N. refugee agency from operating outside the two camps that are home to the small minority of refugees with government registration papers. It refused to register new entries, reluctant to give them an incentive to stay on.

Overwhelmed by a tide of arrivals that shows no sign of stopping, it has softened its stance and begun the process of registering newcomers—even as it presses Myanmar to end the violence and take them back. Myanmar, a mainly Buddhist country that views the Rohingya as illegal immigrants, shows no sign of doing so.

Although it remains unclear what benefits registration will bring for the refugees, thousands are turning out in droves to be fingerprinted, photographed and documented. “I haven’t had any proper aid yet,” 70-year-old refugee Faisal Karim told AFP as he squatted in the long queue for registration by the army at the Kutupalong camp. “I think that when we are registered we will get proper relief, like the refugees who have been here a long time.”