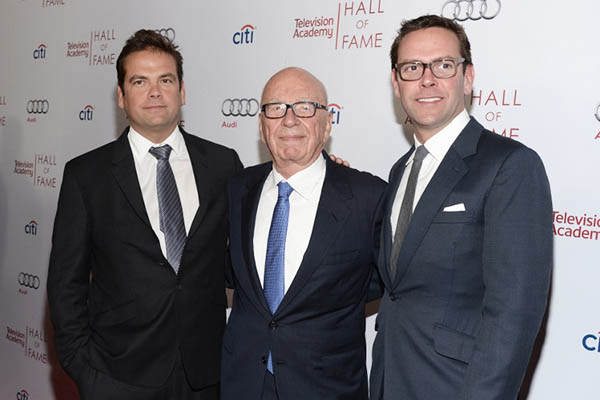 Rupert Murdoch presented a succession plan at media-entertainment conglomerate 21st Century Fox on Thursday, passing his chief executive job to his son James and another key role to son Lachlan.

A source close to the company confirmed the plan to AFP, saying James Murdoch would assume the CEO job while elder brother Lachlan would become executive chairman. The plan is to be presented next week to the board of directors, the source told AFP.

But the 84-year-old Australian-born U.S. citizen who built the global empire does not plan a complete exit. “Rupert Murdoch is expected to relinquish the CEO role but remain executive chairman and continue to drive the company’s agenda,” the person said. “Lachlan Murdoch is expected to be named executive co-chairman and he will work in close partnership with James Murdoch… The two of them will be a team and run the company together.”

The timing of the plan is not clear. But CNBC, which first reported the news, said the change would take place later this year or in early 2016.

James Murdoch, 42, will take over day-to-day management at the New York-based company, which operates the Fox studios in Hollywood, and Fox’s television operations in the U.S. and around the world. The cable news channel, which competes with CNN and MSNBC, will continue to be run by its president Roger Ailes, “reporting directly to Rupert Murdoch,” according to Fox News.

21st Century Fox was created two years ago when Murdoch split the struggling publishing operations from his News Corp. empire from the faster-growing media and entertainment operations. Rupert Murdoch and his family remained in control of both companies after the split. He is executive chairman at News Corp. with his son Lachlan, 43, listed as co-chairman.

Rupert Murdoch has spent a lifetime building his News Corp empire from a single Australian newspaper he inherited. He moved to London where his purchase of the weekly News of the World in 1969 gave him a high-profile foothold in the British market. He went on to buy The Sun, a daily that he turned into a popular and big-selling tabloid.

The success of his popular newspapers helped finance his 1981 purchase of The Times and Sunday Times, prestigious broadsheets, despite intense opposition from parts of Britain’s establishment.

He relocated to the United States where more bold acquisitions followed and where he became a naturalized U.S. citizen in 1985.

The empire came under pressure in recent years from the slump in newspaper revenues and a scandal in Britain that led to the shutdown of News of the World after the revelation the tabloid hacked into the phones of a murdered teenager and the families of dead soldiers. News U.K. has paid out millions in out of court settlements including £2 million to the family of the deceased girl.

The News Corp split in 2013 was aimed at “unlocking value” in the print and entertainment operations. In the latest quarter, Fox reported net income of $975 million on revenues of $6.5 billion. The company also operates National Geographic Channels and local television stations, along with a stake in Britain’s Sky satellite television service. News Corp, which owns Wall Street Journal parent Dow Jones, reported a profit of $23 million on $2 billion in revenues over the same period.