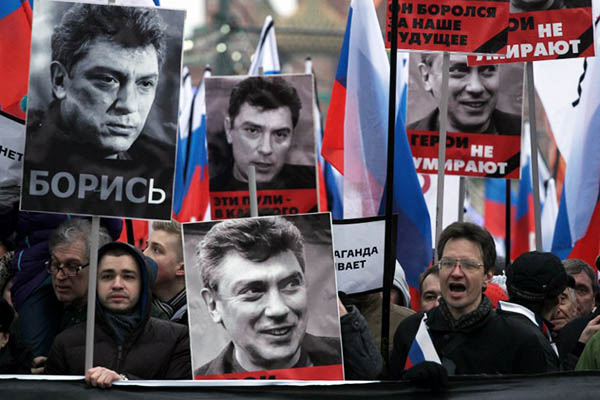 State security agency claims both men are from the Caucasus region.

Two suspects have been arrested over the killing of Russian opposition activist Boris Nemtsov, who was gunned down last week near the Kremlin in a brazen assassination that shocked the country, the state security agency said Saturday.

“Two suspects were arrested today in connection with this crime, they are Anzor Gubashev and Zaur Dadayev, and the head of state has been informed,” the head of the FSB federal security service Alexander Bortnikov told state television. He said the two men were from the Caucasus region.

“The necessary operational and investigative procedures are continuing,” said Bortinkov.

The country was left reeling after Nemstov was shot four times in the back while walking with his girlfriend along a bridge just a short distance from the Kremlin in the center of Moscow last Friday. The 55-year-old was a longtime Putin critic and renowned anti-corruption crusader who served as Boris Yeltsin’s first deputy prime minister in the 1990s.

President Vladimir Putin called the killing a “provocation” that had brought disgrace upon the country, vowing that everything would be done to bring to justice those who committed a “vile and cynical murder.”

The latest assassination of a prominent opposition figure in Russia—where government is accused of cracking down on dissent—prompted a wave of theories in the country as to why he was killed. Some suggest he was assassinated for criticizing Russia’s role in the Ukraine conflict, others for his condemnation of January’s killings at the Charlie Hebdo satirical weekly in Paris by Islamist gunmen.

Investigators also suggested the killers wanted to destabilize Russia, which is facing its worst standoff with the West since the Cold War over Ukraine.