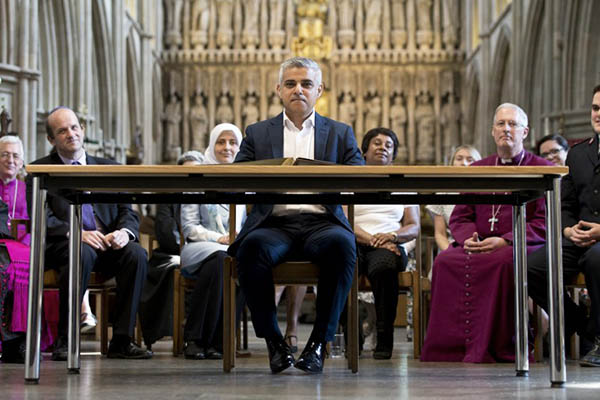 Let’s get it right about the London mayoral race.

Sadiq Khan, the son of Pakistani immigrants, has become London’s first Muslim mayor after defeating his Conservative Party rival, Zac Goldsmith. Khan was the leading candidate for the position because London has and clearly remains with his Labour Party, so the speculation over identity politics, particularly in Pakistan, has been utterly disingenuous.

State-run Pakistan Television (PTV) covered the London race through the prism of politics here at home. It, and the ruling Pakistan Muslim League (Nawaz), used the Sadiq Khan vs. Zac Goldsmith contest to run down Prime Minister Nawaz Sharif’s most vocal opponent, Imran Khan—who was married to Jemima, Goldsmith’s sister, who converted to Islam and whose two sons with Khan have been raised Muslim.

Imran Khan, the PMLN claimed, campaigned for a “Jew,” even though Goldsmith is not Jewish by either birth or practice. Imran Khan’s rival for power in Khyber-Pakhtunkhwa province, Maulana Fazlur Rehman, in coalition with the PMLN, also issued his usual and indefensibly baseless claims that Imran Khan is “an Israeli agent.”

Imran Khan says he “encouraged Zac” to take part in mayoral politics, and that’s perfectly fine. But it was distasteful that in Pakistan the hostile Muslim-Jew binary was latched onto by the media and ruling coalition and Imran Khan was shown as betraying the “Islamic cause” by supporting his former brother-in-law.

Some conservative supporters of Imran Khan’s Pakistan Tehreek-e-Insaf were needlessly embarrassed when their leader went to London and gave a leg-up to Goldsmith’s campaign. In truth, Imran Khan showed himself as a broadminded human being, maintaining good relations with the family of his ex-wife and not being moved by narrow religious considerations.

British Muslim boys and girls have been secretly joining the Islamic State militant group and traveling to Syria to join the jihad. There are extremist Muslim Brits professing a warlike faith who make Europeans claim that multiculturalism is dead in the U.K. Take for instance British Muslim leader Anjem Choudary’s demented tweet of some time ago: “Eventually the whole world will be governed by Shariah & Muslims will have authority over China Russia USA etc. This is the promise of Allah. The false Gods [sic] that people worship instead of Allah will be removed, like democracy, freedom, liberalism, secularism etc.” Goldsmith attacked this kind of madness as a card in his campaign but didn’t succeed.

The victory of Sadiq Khan, the son of a bus driver, is a good sign for Pakistan, whose nationals form the largest Muslim community in the U.K. One should hope that Labour will go on discouraging its Muslim members from baiting Jews before they actually kill the policy of multiculturalism that has made it possible for Pakistanis to live the way they like in their host country.

Forget how Pakis reacted. Just read the comments on Brits daily news. Hate against Muslims is overwhelming. Paul Golding turning back during the ceremony says it all.

Congratulations Sadiq Khan to becoming the first Muslim Mayor of London. I do not know why Imran Khan support Zac Goldsmith against him, may be because Zac is the brother of his previous wife but I believe that WE always have to support the right person beyond any relationship. Although Zac and even the Prime Minister of UK David Cameron were blamed the Raceism against him but London choose him and given a shutup call to them.

Khan’s abundantly proves that London is one of the global lead cities excelling in enlightenment and tolerance. It is not an empire that can be easily consigned to the dust bin of history. Londoners have voted convinconclusive for merit and rewarded one of its self-made sons who toiled to excell.Londonerst have proved that value ethics more than finance. Khan, make London proud of their choice by your outstanding performance@