Home News Galleries Save the Children 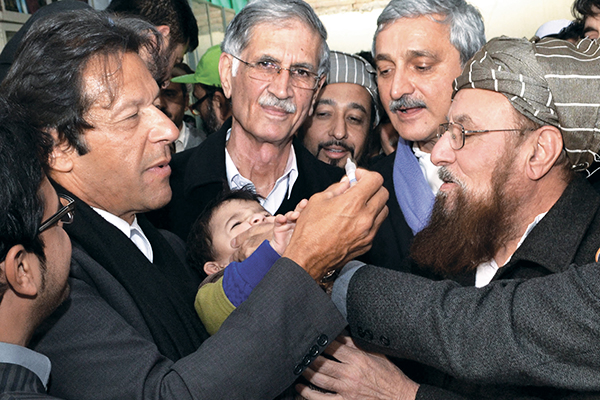 Imran Khan is the latest Pakistani politician to face the wrath of the Taliban after he came out in unreserved support for the polio vaccination campaign currently underway in Khyber-Pakhtunkhwa province, where his party heads the coalition government. Joined by “Father of the Taliban” Maulana Sami-ul-Haq, Khan said attacks on health workers administering polio drops to at-risk children are “against Islam, against Pakistan, and against humanity.” He appealed to the Pakistani Taliban not to target health workers and pledged to personally lead the campaign, adding that the disease could be eradicated within three months if the militants refrained from sabotage. Haq had earlier issued a fatwa supporting immunization and urged parents to get their children vaccinated. The Taliban aren’t pleased with either Khan or Haq. “Imran Khan and Sami-ul-Haq should refrain themselves from the anti-polio campaign,” said Abu Baseer, spokesman for the Taliban-affiliated Ansar-ul-Mujahideen. He said that while the militants were currently focusing on the federal government, they would “turn their guns on” Khan and Haq if they did not relent.

I must ask the question. I see many concerned people in the photograph with the infant. But where are the women?