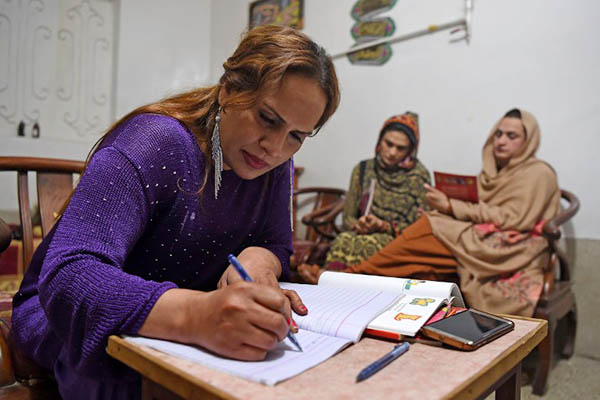 Farzana Jan works to educate members of the transgender community at her home in Peshawar. Abdul Majeed—AFP

Farzana Jan, president of the TransAction Alliance, an advocacy organization for Pakistan’s transgender community, has been fighting for years to ensure the minority community is accorded its due rights in her homeland. Earlier this year, she became the first transgender person in the country to be issued a passport specifying her identity. We spoke with her on the challenges that still plague Pakistan’s transgender community and efforts to advance their cause. Excerpts:

What kind of discrimination have you personally faced?

Have the public’s mindsets improved in the years since you started the TransAction Alliance?

There has been little improvement. The government has slowly started to recognize our rights but there is no specific legislation protecting us because influential people fear backlash if they support us. We’re still mocked, ridiculed and left humiliated. People steal our money, hit us, rape us. The courts and police often ignore us. Do we not have feelings?

How has the government helped in recent years?

It’s taken years of work, but we are now able to get national identity cards and passports with a separate category for our sex. This is very important because a lot of us were abandoned as children and it’s almost impossible to get CNIC documentation without parental consent. Qamar Naseem of the Blue Veins Organization has been a great help in this regard. The government has also promised health cards ensuring free healthcare for our community. I can only hope these are not empty promises.

What do you hope to achieve through the proposed Transgender Protection Policy legislation?

What is the biggest obstacle facing Pakistan’s transgender community?

Of the innumerable obstacles we face, the biggest is the lack of healthcare. We’re treated as pariahs in hospitals, which is especially hard for older transgenders who need proper care. Similarly, people are reluctant to hire us because they say we are “uneducated.” There are many jobs that don’t necessarily require formal education, including cooking, singing, secretarial work, and beautician assistants. But even those of us who are educated can have trouble finding jobs. Not all of us want to perform at festive occasions or beg.

Why do you think people have so much hostility toward the transgender community?

Lack of education and awareness are the primary reasons. Our society has become ignorant. There are children on the streets who have never set foot inside a school. They don’t know how to treat others. But it also depends on people’s upbringing. Barely any parents chide their children for making fun of us. They simply turn the other way or join in mocking us.

Even our families aren’t immune to the abuse. There is a transgender man in our community with two children. Neither one is transgender. When they started going to school, they were bullied for being his children and rather than take action against their tormentors, the school kicked them out. Their father was so overcome with anger and grief that he protested in front of the school by burning their schoolbags. He just wanted his children to get the education most of us never got. What did these children do to deserve this?

What is your opinion of the rights being accorded to transgenders globally?

After Alisha [a transgender who succumbed to her injuries in 2016 after being shot eight times] died, there was a lot of international support for us. I even considered leaving the country because the people who had killed her were constantly threatening me. But I will not stop fighting. The man who killed her is now behind bars and I will continue to scream and shout for the rights of those who can’t defend themselves.

How can the Pakistani public help advance transgender rights?

They can start by treating us like humans, like normal people. If they see us on the street or if we open a shop, they shouldn’t ridicule us. Just let us live like normal people and give us the respect we deserve. We’ve been made into a sort of joke for people to laugh at. They don’t take us seriously. Treat us as equals. Each and every one of us must work together to enact change.