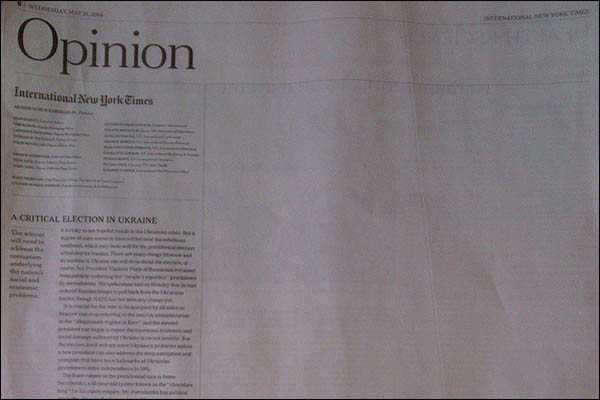 It pains me to see The Express Tribune go from a newspaper with a lot of potential and grit, sometimes misplaced but usually always earnest, to being one that is now so fond of white space it offers readers blank pages in The International New York Times, which comes bundled with it every day. I say this for two reasons; one is personal, the other relating to the broader perspective of a state and society that need more, not less, responsible freedom of expression and debate.

I wrote for the Tribune for more than three years. Apart from an occasional intervention by an over-enthusiastic desk-hand to improve my syntax, the newspaper never interfered with my content. I wrote on multiple issues and, since I am a cultural liberal and a strategic conservative, I suspect some of my writings on strategic issues didn’t really sync with the paper’s worldview. They got published nonetheless.

Getting that kind of space and freedom always makes a writer happy. Additionally, the Tribune op-ed staff were always very courteous. I want to thank them and their editor, Omar R. Quraishi, for that. Having handled the Daily Times op-ed pages, I know what a thankless job it can be to deal with writers’ idiosyncrasies, myself being no exception to that rule, each insisting on having penned the best thing this side of the Gospels.

But good things don’t last. My first article to land in trouble was in 2013. It was an analysis of the leaked draft of the Abbottabad Commission report. I was told it could not be published for policy reasons. I am still not privy to those policy reasons, but my hunch is that they had to do with my discussion of the Inter-Services Intelligence directorate’s failings as documented in the report. I briefly stopped writing for the newspaper until its editor, M. Ziauddin, a mensch and a most experienced journalist, simply asked me to resume. One can’t refuse a person of his stature and I did as requested.

It went smoothly again for a while and then I noticed some lines excised from a piece. My inquiries again drew the same response: policy reasons. This time I insisted that I be informed of what those policy reasons are so at least I know what I can and cannot write, instead of having to find lines dropped in the published piece. This begot a Zen-like silence.

The next piece went through the censors unmolested. The one after that was again subjected lightly to content-editing. It was then that I realized that something was amiss. No one was prepared to tell me what was going on, perhaps because I wasn’t on the staff, and I wasn’t prepared to continue writing not knowing when or what will be sanitized. So, I stopped writing again and moved on.

Much later, a Guardian piece, quoting from an email from the Tribune editor, revealed that a decision had been taken, under threat from extremists, to tone down some of the content. Something like that is always difficult to decide. How does one resolve the tension between a newspaper’s responsibility to stay true to and continue to publish what it thinks it must and take stock of the realities on the ground and measures to save its staff? Even when one can find reason to criticize the decision, one has to respect it and show empathy. It is easy to be brave from a distance. Also, while one can take risks for oneself, putting the lives of others in danger is very much different.

Of course, one can argue whether the newspaper owners took the line of least resistance and, rather than spending money on the safety of the staff and securing their buildings, decided to simply cave in. It will be a valid argument, though not without a caveat. No protection guarantees foolproof safety and security. That is the point where every individual has to take a decision. If I cannot do that which I am required to, should I continue? Most will; some won’t.

My point is that there’s nothing black and white about this. Tribune can bring to the table as many valid arguments to support its decision to not act brave as those who think they must if they want to stay alive as a meaningful newspaper dealing with and shaping public opinion. If you can’t hawk the very wares you are in the market for, close shop and go home.

My position on Tribune’s decision is critical but empathetic. I understand why they took that decision. I will also say that let the market decide whether they should stay in business or not. But I have a problem with the swings of the pendulum, the difference between the Tribune of yesterday and today. Yesterday, they were prepared to be one-dimensional and brash on many issues, often ignoring the complexity of a situation. Today, they have surrendered most humiliatingly. The misplaced bravado of yesterday has been replaced by a cowardice so obvious that it is embarrassing even to witness.

But if this were all, I wouldn’t have had to write this piece. What is happening now goes beyond a decision to save lives. It is about staying clear of the very forces the Express Media Group, which owns the Tribune, and others like ARY have unleashed in order to bludgeon their arch-rival, The Jang Group. Let’s consider this step by step.

What was the article by Ali Sethi published by The International New York Times and dropped by the Tribune in the local edition? It was an article on blasphemy. And why was it dropped? Because, and this is where it begins to stink to high heavens, in trying to bring the temple down on Jang by accusing it of blasphemy, the Express Media Group doesn’t want to end up getting buried under the debris itself.

In other words, the newspaper that decided to save its staff and itself from attacks by muzzling its writers has now decided to rouse the masses against its arch-rival and hence does not consider it expedient to publish an article dealing with blasphemy and how such laws have been abused. The irony is that the Tribune has chosen to play the blasphemy game and point fingers at others even though it was precisely the abuse of such laws and the vigilante attitude by the extremists which forced Tribune to compromise its ideals earlier.

So while the Tribune might still look as if time hasn’t ravaged it, the real picture is down in the cellar and that picture looks ugly and hideous. And I haven’t even touched upon the Tribune’s ‘editorial,’ its language, and its content which the paper penned in response to Imtiaz Alam’s resignation notice.

To be fair, the Express Media Group is not the only culprit here. The entire media landscape stinks of petty rivalries, misplaced priorities, myopic policies, and a death wish. But as I said earlier, the Tribune’s decision to self-destruct is particularly galling for me because I once wrote for that newspaper and because of the many brilliant people who staff it and who, I am certain, are not happy at this sad turn of events.

Sir Are u no more on ET?I never bumped on a piece more courteous illuminating than urs.Your one piece is worth one library. Read ET editors twitterati. u would feel they are a mafia. U scratch my back I yours.There are now only two sane persons in Pakistan. One u, and the other jobless Abbas Nasir.Forty five years back, Dawn used to publish my articles. Now they say we do not accept unsolicited articles. ET is generous in, at least, publishing my letters to the editor. About articles they hold what u call zen like silence.

Well-written as always, but I think that ET (and Newsweek) have a far greater responsibility than simply reporting the truth. The English-language print media is the last resort of the liberal in Pakistan – these papers have virtually no following outside of well-read urban circles; if they start to cave in to extremist pressure, any expression of progressive ideals will be completely erased from the mainstream public sphere and will be limited to fringe blogs on the internet. For comparison, Urdu dailies like Jang or Akhbar-e-Jehan cannot even think about touching the blasphemy issue because they’re far more exposed.

The same story goes for Sindh Express – Express Media Group’s Sindhi newspaper, which was like a fresh breeze when newly launched two years back.
I was a keen reader of ET, contributed some blogs, too. But the sad demise of ET and SE is heart breaking. For me, overall demise of Pakistani journalism is heart breaking. Express Media Group and ARY don’t know the gravity of the actions they are doing. By supporting and orchestrating a particular narrative, by making trivial rivalry with Jang Media Group, they are digging ditch for whole landscape of Pakistani journalism, including themselves.
Thanks for the great piece. an eye-opener. I wish them to read this.