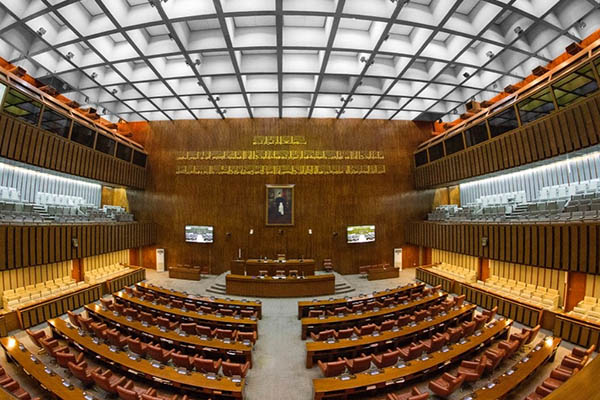 The elections bill was presented by Parliamentary Affairs Minister Murtaza Javed Abbasi and aims at removing the requirement for the Election Commission of Pakistan to utilize electronic voting machines in the next general elections, as well as reversing directives to allow overseas Pakistanis to vote via Internet. The NAB bill, meanwhile, was presented by Law Minister Azam Nazeer Tarar and has been touted as a means to curtail the powers of the accountability watchdog to prevent it from being used for political victimization.

Following their approval from both the Senate and the National Assembly, both bills would be placed before President Arif Alvi for his approval prior to them becoming law. It is as yet unclear if the president could attempt to prevent this, as the Pakistan Tehreek-e-Insaf has already voiced its opposition to the reforms, alleging they are a means to rig elections and “protect” the incumbent accountability from corrupt practices.

Summarizing the reasons for the tabling of the elections act, the law minister told the Senate that it was not “depriving” overseas Pakistanis of their right to vote, but rather was ensuring that the sanctity of their vote could be protected. “The ECP [also] said we will not be able to conduct elections [with EVMs],” he said. “The Election Commission should ensure overseas Pakistanis can vote,” he added.

In their rebuttal, Leader of the Opposition in the Senate Shahzad Waseem claimed the government was trying to “rob” overseas Pakistanis of their right to vote. His fellow PTI leader, Senator Shibli Faraz, likewise said the ECP’s objections to the use of EVMs and internet voting “held no value.”

Despite the opposition’s criticism, the Elections (Amendment) Bill, 2022 was passed by the Senate.

The opposition also protested the passage of the National Accountability (Second Amendment) Bill, 2021, but it too sailed through the Upper House. Under the proposed changes to the laws, a NAB chairman’s tenure has been reduced from four to three years, with no option for extension. Similarly, the NAB deputy chairman would be appointed by the federal government, not the president, and would become the acting chairman following the completion of the tenure of the chairman until a new chairman could be appointed.

The new law also removes NAB’s ability to take action on federal, provincial or local tax matters, or against regulatory bodies. It states that NAB’s jurisdiction would not be applicable to decisions of the federal or provincial cabinets, their committees or sub-committees, the Council of Common Interests, the National Economic Council, National Finance Commission, Executive Committee of the National Economic Council, Central Development Working Party, the State Bank of Pakistan and similar bodies “except where the holder of the public office has received a monetary gain as a result of such decision.”

The law would also not be applicable on “procedural lapses” in the performance of any public or government project unless “there is evidence to prove that a holder of public office or any other person acting on his behalf has been conferred or has received any monetary or other material benefit from that particular public or government work or function whether directly or indirectly on account of such procedural lapses, which the said recipient otherwise received.”

NAB officials have also been barred from making any public statement before filing references and during the investigation, with violators to face imprisonment of up to one year and a fine of Rs. 1 million. It calls for punishment for filing false references to be up to five years’ imprisonment. The new law also calls for its applicability to include any cases filed under NAB laws since 1999.