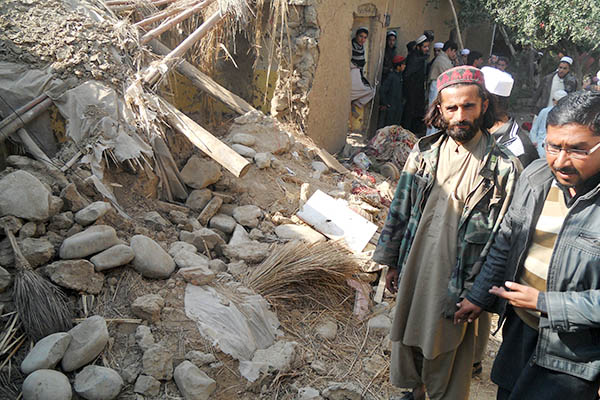 A U.S. drone strike early this morning in Hangu, Khyber-Pakhtunkhwa, killed six people, including a senior leader of the Haqqani network, officials said. This was only the second such strike outside Pakistan’s federally-administered tribal agencies.

The attack targeted a madrassah that belonged to the Haqqani network, a militant group blamed for some of the deadliest attacks in neighboring Afghanistan. The network is viewed in Pakistan as being part of the “good Taliban” for remaining focused on terrorism outside the country.

A Haqqani network source said the madrassah was an important rest point for members fighting in Afghanistan’s Khost province. “The madrassah served as a base for the network where militants fighting across the border came to stay and rest, as the Haqqani madrassahs in the tribal areas were targeted by drones,” the source said on condition of anonymity.

Another Haqqani network source confirmed that their spiritual leader, Maulana Ahmad Jan, was among those killed in the Hangu strike. “He was the spiritual leader and head teacher of the Haqqani network,” said the source, adding that Jan was also a member of the network’s ruling council. “He was receiving people coming to condole over the death of Nasiruddin Haqqani because followers were not able to meet any other members of the Haqqani family.”

On Nov. 10, Nasiruddin Haqqani, chief fundraiser for the Haqqani network and a son of the network’s founder, was killed outside Islamabad in mysterious circumstances.

The drone strike came a day after Sartaj Aziz, Prime Minister Nawaz Sharif’s adviser on national security and foreign affairs, said that the U.S. had agreed to halt drone strikes so as not to disrupt the dead-on-arrival peace process with the militants. Khurshid Shah, leader of the opposition in the National Assembly, was quick to make political capital by noting that the Hangu attack was really a strike against Aziz.

Islamabad condemned the drone strike, as it ritually does, which marked the first time that the U.S. hit a target inside Pakistan proper. The only previous strike outside the tribal areas happened in 2009 in Bannu, a so-called “frontier region.”

“The government of Pakistan strongly condemns the U.S. drone strike that took place in Tal area of Khyber-Pakhtunkhwa’s Hangu district at 0445 hours on Nov. 21, 2013,” the Foreign Office said in a statement. “These strikes are a violation of Pakistan’s sovereignty and territorial integrity … It has been consistently maintained that drone strikes are counterproductive, entail loss of innocent civilian lives, and have human rights and humanitarian implications. Such strikes also set dangerous precedents in inter-state relations. These drone strikes have a negative impact on the government’s efforts to bring peace and stability in Pakistan and the region.”

“Another Haqqani source said the madrassah was an important rest point for members fighting in Afghanistan’s restive Khost province.”

Does it make it a legitimate target?