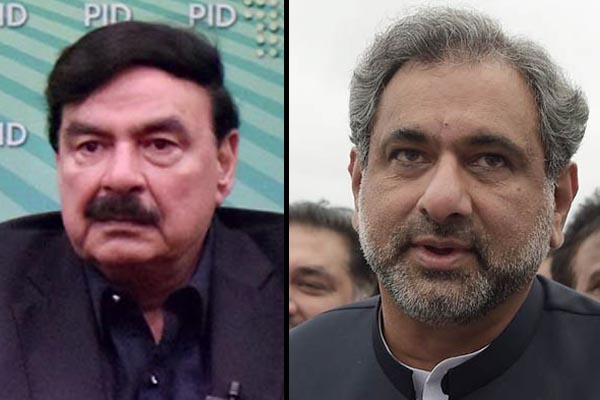 A former prime minister, a sitting member of the federal cabinet, and a member of the National Assembly were among the latest Pakistani politicians to test positive for the novel coronavirus on Monday, as the country’s confirmed cases soared past 100,000 with more than 2,000 deaths.

PMLN President and Leader of the Opposition in the National Assembly Shahbaz Sharif, meanwhile, offered his sorrow at the news. “Abbasi is an asset, we hope he will recover soon,” he added in a statement.

Also on Monday, Federal Minister for Railways Sheikh Rashid Ahmed was reported as having tested positive for the novel coronavirus. According to a statement issued by the Railways Ministry, Ahmed is currently asymptomatic and has commenced a two-week quarantine at home.

His testing, conducted on Friday, came just before he hosted a dinner for parliamentarians, which was also attended by Foreign Minister Shah Mehmood Qureshi. Per local media, Prakash is asymptomatic and has gone into self-isolation for the next two weeks following his diagnosis.

At least five Pakistani lawmakers have died due to coronavirus thus far—Jamsheduddin Kakakhel, 65, of the Khyber Pakhtunkhwa Assembly died of the virus last week, the same day as Punjab lawmaker Shaukat Manzoor Cheema. Also last week, Sindh minister Ghulam Murtaza Baloch died of the virus, while Haji Munir Orakzai, 61, of the National Assembly died of cardiac arrest after reportedly recovering from COVID-19 in early May.

Shaheen Raza, 60, of the Punjab Assembly, and Syed Fazal Agha of the Balochistan Assembly died in May after testing positive for COVID-19.