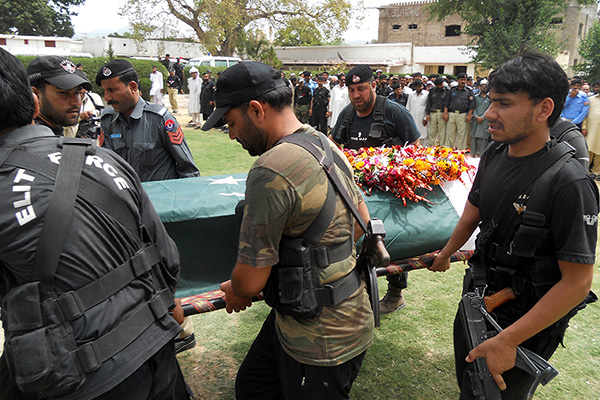 The target of the late Friday attack was top police officer Dilawar Bangash who “survived with minor injuries” two officials said. Bangash was heading from Peshawar to the garrison town of Kohat when the attack occurred.

“More than a dozen gunmen opened fire from both sides of the road” as Bangash’s vehicle, which was escorted by another police van, crossed the militant infested town of Matani, senior police official Shafiullah Khan said.

“Militants who were armed with light and heavy weapons opened fire killing six police officials in the lead police van,” Khan said. Three others were wounded including Bangash, who was travelling in the other vehicle. The gunmen also attacked a police rescue team, killing one policeman and wounding two more, he said.

“The firing was sudden and intense, the exchange of gunfire continued for quite sometime, but Allah saved my life,” said Bangash.

Another police official Fazal Naeem said police retaliated but he had no details on possible militant casualties because the incident took place around midnight on Friday.

Khyber-Pakhtunkhwa province is on the frontline of a nearly seven-year Taliban insurgency and borders the semiautonomous tribal belt where Pakistani troops are fighting against homegrown militants.

No one immediately claimed responsibility for the attack.