Home Latest News Sharif Wants to Give Peace Another Chance

Sharif Wants to Give Peace Another Chance 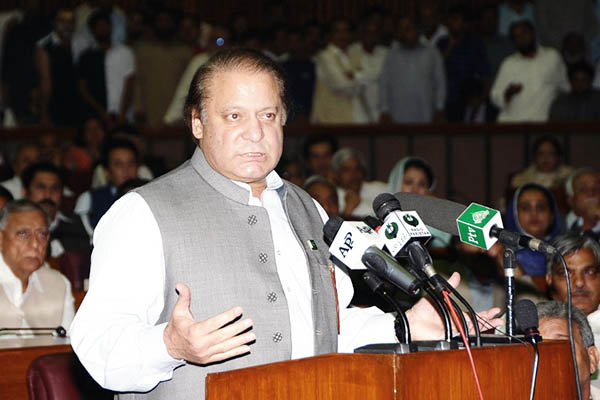 Prime Minister Nawaz Sharif on Wednesday dismissed speculation he would launch an offensive against the Taliban following a wave of bloody attacks, saying peace talks deserved another chance.

In a highly anticipated speech before Parliament, Sharif also called on militants to observe a ceasefire and named a committee to assist in dialogue efforts.

Just hours earlier, three bomb blasts including a suicide attack targeting security forces killed at least four people in Karachi, with the Taliban later claiming responsibility. The government has come under fire for failing to set a strategy to respond to the surge in militant violence, which has resulted in 114 deaths since the start of the year, according to an AFP tally.

Sharif was elected last year vowing to reach out to the Taliban and engage in talks to end their insurgency that has raged since 2007. In his address on Wednesday, the prime minister paid an emotional tribute to the victims of terrorism, saying: “Common citizens are being targeted and our innocent children are dying. The society is surrounded by fear. The acts of terrorism have to be stopped forthwith, because terrorism and talks cannot go side by side.”

He also slammed the Taliban for rejecting the government’s first offer of talks and distorting the teachings of Islam, adding: “Our very existence is endangered. We cannot allow the nation and the country to be hostage to militants.”

He continued: “I know that today if the state wants to eliminate terrorists by force, the entire nation will stand by it. However, when the offer of talks has come to the fore from the other side, we … want to give the peaceful solution another chance.” To assist in these efforts, Sharif said he would form a four-man committee with expertise in matters related to militancy.

Taliban spokesman Shahidullah Shahid said its central shura, or consultative council, was meeting to consider the new development. “We are ready for meaningful negotiations provided the government shows sincerity of purpose,” the spokesman added.

But many observers doubt the initiative will have an impact given the demands of the Taliban, which include a release of their prisoners, the Pakistan Army’s withdrawal from the tribal areas and an end to U.S. drone strikes.

Wednesday’s bombings were the latest in quick succession to target security forces, with 26 paramilitaries killed in Bannu and 13 people killed in an attack near the Army’s headquarters in Rawalpindi earlier this month.

Analysts say the attacks highlight the Taliban’s desire to capitalize on the government’s reluctance to green light a major military operation.

Irfan Siddiqui, special assistant to the prime minister and a member of the talks committee, told reporters that the committee expected an assurance from the Taliban that they would halt their violence before talks could start. “We do expect an assurance from the Taliban—either verbal or practical—that they won’t carry out any such incident which can sabotage the negotiations process,” he said.

Another member of the committee, Rustam Shah Mohmand, said: “It is difficult to have an optimistic view about any success because of deep mistrust on both sides. The success of the negotiations will depend on how much support the government gives to the committee and how wide its mandate is.”