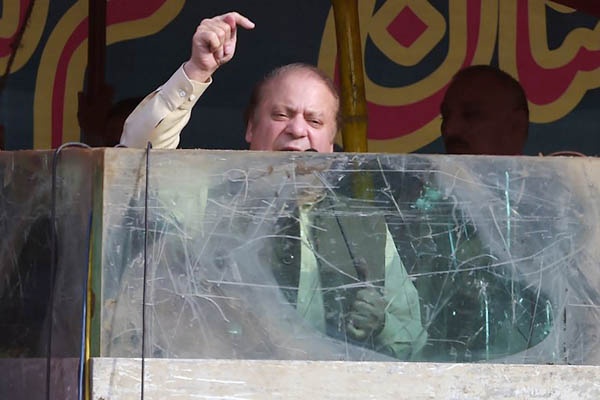 Disqualified by a 5-member bench of the Supreme Court of Pakistan and unshackled from the prime minister’s office, Nawaz Sharif has decided to take to the street. The strategy seems to be to go to the people, his voters, in a show of political strength. This is why he chose the GT Road, preferring it to his much-touted Motorway that, despite the convenience of travel, is a politically barren stretch.

En route to Lahore, his seat of electoral power, he has been making speeches to his voters from the safety of a bulletproof glass window. The leitmotif can be summed up thus: you [the people] chose me to lead you, but five men in robes disqualified me. I have been wronged but you have been wronged and your choice insulted. You have now to start a revolution.

The icing on this is the contention that this is a conspiracy to derail development, ironic since his party is still in power and he just chose a prime minister to lead the government. So far P.M. Shahid Khaqan Abbasi seems to be taking his job rather seriously.

Sharif knows the road ahead is treacherous, the standing slippery. The disqualification, a major setback, might yet be the least of his problems. The corruption references against him could not just distemper his world, but destroy it, a world built painstakingly and by suffering many indignities.

His angst is understandable. He is left with no choice but to go to the people. This is signaling not only to the judiciary and the Army, but more importantly to his own party, and its leaders: I am PMLN, let no one be in any doubt. In the process, the man, who until a few days ago stood for the Constitution and law, at least in theory, is now prepared to unleash the people against the standards set by the Constitution and the law of the land, the very framework that gives to a state and society the rules of the game in order for both to function.

This is a desperate move by a man who is not left with many choices. Mercifully, there’s not much possibility of a crowd mostly riding SUVs to act as sans culottes. That’s a relief. But the strategy’s intent must still be debated. How dare five robed men deprive an elected prime minister of the mandate given him by the people.

Peoples’ power has been at the center of many political debates. That power is celebrated in such misplaced adages as vox populi, vox dei. But common debates tend to forget that most discerning political minds, far from hailing vox populi have been downright and rightly wary of it.

This is how James Madison put it in The Federalist No. 38 when arguing for an Upper House: “In… critical moments, how salutary will be the interference of some temperate and respectable body of citizens, in order to check the misguided career, and to suspend the blow meditated by the people against themselves, until reason, justice, and truth, can regain their authority over the public mind? What bitter anguish would not the people of Athens have often escaped, if their government had contained so provident a safeguard against the tyranny of their own passions? Popular liberty might then have escaped the indelible reproach of decreeing to the same citizens, the hemlock on one day, and statues on the next.”

In fact, the writers of The Federalist were convinced that they did not want an Athenian democracy. Hamilton created the Electoral College precisely as a safeguard against a popular demagogue. It is somewhat ironic that George W. Bush made use of it despite losing the popular vote to Al Gore and Hilary Clinton lost to Donald Trump despite winning the popular vote. But the point remains: the clear objective of America’s founding fathers was to create a republic rather than a democracy, to ensure that the system has checks against the passion of the people and the exploitation of those passions by a demagogue.

More than two millennia before the writers of The Federalist, Socrates arrived at much the same conclusion. Plato, in The Republic, tells us that Socrates considered the mobs’ passions, the most unharnessed, destructive expression of vox populi, as the beginning of dictatorships. It was a prescient observation and we are witnessing today its expression and its political results in many parts of the world.

One of the central themes in Fareed Zakaria’s book on illiberal democracies is the evolution of constitutionalism as separate from the form and structures of electoral politics. While greater numbers of people got the vote, as they should have, the rules of the game evolved through legal and normative acceptance of constitutionalism. That was and remains the only check on the hooliganism of vox populi.

Sharif has moved away from upholding the Constitution and the laws to rabble-rousing. He is creating the binary of people versus the five robed men, five men who exercise authority not because they can fight a mob but because, working within the Constitution and applying the law, their authority is accepted by society as well as other organs of state. This is what keeps the balance, the line that separates order from anarchy. And lines must be respected, as Umberto Eco tells us: “Romulus draws a boundary line and kills his brother for failing to respect it. If boundaries are not recognized, then there can be no civitas.” Civitas is the operative word here.

So, yes, political strategies are important. Sharif is fighting for his political life. But equally, he has been the guardian of the Constitution, not once, not twice but three times. His fight must be tempered with that realization—unless he has decided to undermine constitutionalism because his dynastic survival is more important than the compact on which this state and society rest.

Well written article. He has no locus standi for defiance against lawful decision of constitutional apex court for which he has taken oath before taken charge of Prime minister. He has yet to face courts for alleged corruption cases as directed by the apex court.

I think the narrative Nawaz is building is more nuanced rather than binary. It is not the people vs the law only but essentially implicates the ‘others’ who have purportedly used the law (in their view) against people’s will. You may perhaps note as the debate moves from the GT Road to serious analysis that people have adopted the latter version and looked away from the one which undermines the law per se. PMLN, too, is officially forwarding the same nuanced view.

The decision is beyond constitutional boundaries. Picking the case in 184-3, exercising Executive authority to form JIT and that too with WhatsApp story, disqualification on something that was not part of the original pray rather discovery of JIT and not properly debated ( SC not asking for Guidance from experts) and finally appointing a judge to oversee NAB process. It’s SC who risked the equation of respect of law vs respect of vote. From God Father to Sicilian Mafia enough foot prints lead to the conduct of judges that created the binary. That’s the inherent risk of going down the path of becoming political arbitrator and judiciary fell for it twice in recent past only to be able to create the binary. With current mood and remarks from our honorable lords it will be getting more messy and dirty… with Judiciary itself becoming first victim as now they will be common punching bag by all parties. So unfortunate that efforts of two extra ordinary CJs after Mr Chaudhry has gone wasted so quick and Pakistan stands farther away from the desired path.