Home Lightbox ‘She was my Hero’

‘She was my Hero’ 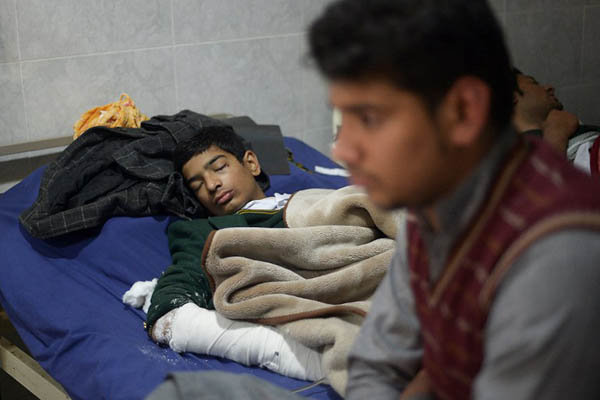 A survivor of the Taliban attack on the Army Public School recalls his teacher’s sacrifice.

A teenager who was injured in Tuesday’s attack on the Army Public School in Peshawar owes his life to his teacher, who tried to shield her students from the Taliban gunmen that opened fire on them.

The militants killed 141 people, most of them children, in the worst attack in Pakistan’s history. Speaking from the Lady Reading Hospital, Irfanullah, 15, told Newsweek he would likely be dead if his teacher, 24-year-old Afsha Ahmed, hadn’t intervened.

“They [terrorists] entered our classroom as we were sitting with our teacher,” said Irfanullah, who was shot in the chest and is currently recovering in hospital. “She seemed to understand what was going on before we did because she immediately stood up and prevented the terrorists from targeting us,” he added.

According to a tearful Irfanullah, Ahmed told the terrorists that she would not allow them to shoot her students. “She was so brave,” he said. “Her last words to the terrorists were: ‘You must kill me first because I will not see my students’ bodies lying in front of me,’” he added.

Irfanullah says the Taliban didn’t seem to care about anything she said and immediately threw something on her body. “The next thing we knew, she was on fire,” he said. “Even while burning, she shouted at us to run away and find refuge.”

The teenager says he still feels guilty for abandoning his teacher, despite knowing he could have done nothing. “I feel so selfish for running away instead of trying to find a way to save her,” he said. “She is my hero … she was like a superwoman,” said Irfanullah. “Who will teach us now?”

A Journey on the Grand Trunk Road

I salute these people teachers and brave student.May Allah give them more strength

Some might consider it is time that we courageously faced those absurdities being taught that underlie such atrocities. Was Salman Taseer the only brave man in Pakistan to face these demons and did our courage die with him?

Brave teacher I salute you !!!! May her soul get supreme position

great lady of PAKISTAN …..I salute u mam you are our SUPERWOMAN seriously …. may ALLAH bless courage to all of us like you (aamen)

Very sad situation. our deepast sympathy to all Pakistan people. our country also suffered past yeras same as. we all are gather to defeat terrorsism.

May her soul rest in peace

Now he is able to teach us of the selfless love only we humans know. Heavy burdens often break or make people.

We r brave pakistani nation.InshaAllah we will win all battles. inshaAllah

Irfanullah please remember her in your prayers. She is now in jannat. She was lucky she did not live with guilt. Instead she is enjoying and secure from all dangers with Allah. However if you want to really repay her. Do not stop educating yourself, stand up to these butchers and never be scared of doing what is right. I too will not stand up for these things after reading this.

May her soul rest in peace. Let the students who faced this become the future of Pakistan and lead the country in the most peaceful way possible…..

It was a very heartbreaking event. My deepest sympathy to all Pakistan people and salute and respect to the teacher. I hope Pakistan should consider her martyr.

I agree with you

Savages have no conscience. The one thing that could have saved them from this life of barbarism was education and by depriving the kids from the means to escape the same fate as them, they are trying to ensure that future generations too will live in the same dark alleys that will haunt them forever. Stop this madness, even if it means giving up our religions, our lands our egos if those are the causes that make animals out of humans. Let there be peace for once, forever.

My salute to this brave lady;may her soul rest in peace…………

Education and educated people are the enemies of the taliban. They are terrified of education because they know that educated people will recognize them for the ignorant cowards that they are. Schools must be rebuilt, teachers must teach, and students must keep learning. These institutions must be protected like sacred ground. This is where the taliban will be defeated, not in battlefields.

This is huge price we are paying! 141 innocent kids! We as a nation, as a human, must unite and kill those butchers who are behind this, those seven men are dead but the master mind and the remaining force is still out at loose. How can we let them plan or do something more? All over the world, we need to do something. It’s time! It’s high time!

I am short of words to describe the heroic act of the teacher. May Allah shower his blessings on her. She showed to cowards like us how to live and how to die? Do we have courage to do what is required of us?

May her soul rest in peace. She truly must have been a great teacher. We salute you ma’am!

We are proud of you Ms Ahmed ….

we as nation are stood up against terrorism. together WE SHALL RISE AND SHINE…INSHA ALLAH….

Irfan and my children u want to repay hr then u must be brave remember hr ur life and do the good deeds by recalling hr memories. U r not alone my bachy we feel how u felt we do as we feel k kash hum we could save our children

Irfanullah…never forget your hero and always be brave like her!

A heart wrenching moment in my life .A Courageous Leady !May GOD elevate her renks in jannat ul firdous along with little flowers.

Please bachoon apna khayaal rakho n each n everyone of u turn yourself into brilliant students n become practicing good Muslims so wen u meet your teacher in jannah u lol all make her proud ….. Please do it let Her sacrifice go to waste

I can t stop to cry she is a real hero

She was so brave, salute for her bravery.