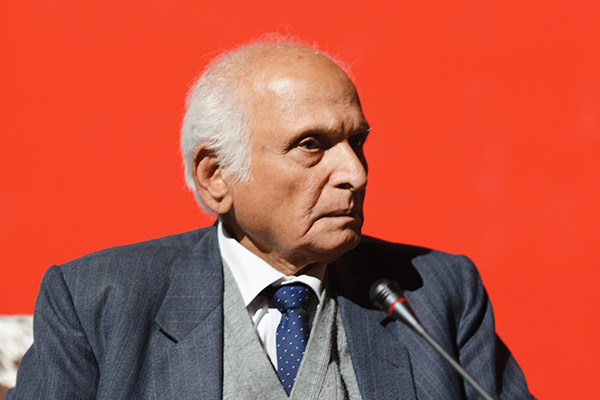 Courtesy of the Lahore Literary Festival

The 89-year-old Husain, an issueless widower, is Pakistan’s most accomplished living author. On Sept. 20, France’s ambassador pinned Husain with the Officier de L’Ordre des Arts et des Lettres (Officer of the Order of Arts and Letters) medal at a function in Lahore, the writer’s hometown. The only other recent South Asian recipients of the award, which was founded in 1963, have been the Indian actors Shah Rukh Khan and Aishwarya Rai. Last year, Husain was shortlisted for the Man Booker Prize for Frances Pritchett’s English translation of his most famous novel, Basti, and the Lahore Literary Festival, the city’s largest annual event celebrating literature and the arts, honored him with a lifetime achievement award.

Admired abroad, Husain has always aroused resentment at home. Through his modern technique, absorbed from Western literature, and employment of fables and rejected mythologies and religious symbols of extreme suffering and martyrdom, Husain has produced a gloss on the Pakistani experience that, to his conservative compatriots, appears hostile and even unpatriotic. The Pakistani state has remained more mystified than offended with Husain’s writings. In 2007, it awarded him the Sitara-e-Imtiaz (Star of Excellence), the third highest civil honor, only in deference to his international repute.

He traces his literary lineage to writers past—Mirajee, Manto, Askari—who were all averse to mixing art with political ardor and who were often equated, barring Askari, with licentious paganism. What Husain shares with these three writers is a nexus with the Western literary tradition and a passion for translation—he has translated novels by André Gide and Stephen Crane. As the author of five novels and hundreds of short stories, the quality of Husain’s prose has not been dimmed by the forced labor of column-writing, something he does on a weekly basis in Urdu (for Express) and English (for Dawn) without ever missing a deadline.

Husain writes his fiction in an obscure, untranslatable dialect of Uttar Pradesh’s Dibai village, where he was born. This makes the translations of his short stories by the enviably bilingual Muhammad Umar Memon, who publishes the Journal of South Asian Literature in the U.S., even more impressive. Only someone with Memon’s uncanny ability can successfully explain a tough literary cookie like Husain.

To his early-day peers, Husain was mostly unexplainable and inoffensive. Some Pakistani men of letters were dismayed by Husain’s imperviousness to nationalism and revolution. After Independence in 1947, Lahore’s left found him cold, and he stood aside when the Progressive Writers’ domination of the literary market imposed tenets of extreme political arousal; the right found him flaccid to their demands of ideology. The new writers thought his Dibai-inflected Urdu was funny. When India-centric nationalism peaked, friends found Husain walking around in his personal bubble of nostalgia about his old home in “enemy” India.

Memon provided the key to understanding the inner world of Husain in his 1989 paper, “Shi’ite Consciousness in a Recent Urdu Novel: Intizar Husain’s Basti.” The novel harks back to the utopia of a united, pre-1947 India through Husain’s hero, Zakir (One who Recalls), and makes him experience the post-Independence dystopia of Pakistan.

Here’s what the New York Review of Books has to say about the novel: “Basti is a beautifully written reckoning with the tragic history of Pakistan. Basti means settlement, a common place, and Husain’s extraordinary novel begins with a mythic, even mystic, vision of harmony between old and young, man and woman, Muslim and Hindu. Then Zakir, the hero, wakes to the modern world. Crowds gather. Slogans echo. Cities burn. Whether hunkered down with family or furtively meeting to exchange news with friends in cafés, Zakir is alone in a country lost to the politics of loneliness.”

Husain abstained from the New Urdu style and the exclusionary cause of nationalism it baldly served.

Basti was a rebound from the trauma of Pakistan’s civil war and breakup in 1971. Husain’s next rebound novel was Naya Ghar (New House) after the equally depressive “consolidation” of the Pakistani state by military ruler Gen. Zia-ul-Haq. His Agay Sumandar Hai (Beyond Is the Sea) is a reflection on the urban violence of Karachi and its distance from the utopia of Andalusia.

Through his mute presence, Husain deceives. He listens and rarely challenges, as if he doesn’t care. He remains sealed to the chatter around him as if guarding something within that would wilt if allowed airing. He writes prose that has nothing to do with the idiom practiced by Lahori writers. In so doing, Husain is perhaps guarding the purity of the spoken word of his childhood from contamination and, in the process, also guarding himself from what Pakistan has become.

Husain’s writings preserve his long-gone world. In his memoir, Chiraghon ka Dhuan (Lamp Smoke), Husain recalls his meeting in Lahore with the poet Maulana Mahir-ul-Qadiri, who, having spotted the familiar lilt of his dialect, asked whether Husain was from Uttar Pradesh’s Bulandshahr. (Qadiri himself hailed from a village close to Bulandshahr’s Dibai.) This idiom was frowned upon as lowbrow. Indeed, authors from Bulandshahr had abandoned its colloquialisms and begun writing instead in the New Urdu style with cliché masquerading as idiom and Arabic words supplanting Hindi ones. One New Urdu believer decried and belittled Husain’s throwback to the Dibai idiom by likening his speech to that of the wives of Rampur’s butchers. Husain never cared for such talk. His memoir is stubbornly couched in the speech of Dibai; every page has a word that you can’t find in Pakistan’s bowdlerized post-1947 dictionaries. And that’s where Husain’s spice is.

In his memoir Husain is generous about his contemporaries committed to nationalism, the slightly chiding tone flecked with the acid of his Dibai slang. There is hardly anyone among Husain’s friends who didn’t at one time or another become riled at his lack of commitment to New Urdu and the exclusionary cause of nationalism it baldly served. He observed, went along, but reserved judgment. Pakistan’s men of letters almost always betrayed their chosen causes because of their lack of character or vision. Husain escaped this ignominy because he never really believed; he never had a Cause in the first place. It is perhaps for this reason that Husain never found himself censored—or jailed.

In the 1950s, Lahore was divided between two literary groups, the progressive leftwing Anjuman-e-Tarraqi-Pasand-Mussanafeen and the rightwing, “faithful to Pakistan” Halqa-e-Arbab-e-Zauq. Husain managed to straddle the divide because both groups thought him harmless while probably finding him unworthy of their respective causes. Husain frequented Lahore’s teahouses (Arab Hotel, Nagina Bakery, Coffee House, Cheney’s Lunch Home, Coffee House, Metro, Lords, and Pak Tea House) where literary personalities huddled with their admirers. The giants—Patras, Faiz, Taseer—rarely visited, but when Taseer and Askari tangled in a teahouse, it was pure internecine rightwing meanness that has now become belles lettres.

It was Askari who prepared Husain for his last soul mate, Nasir Kazmi, the poet who keeps on being partially discovered by critics tired of the heavily Persianized ghazal. Kazmi was as eccentric as Manto, but less prickly, spoke like an angel when he wanted to, and engaged Shaikh Salahuddin and Haneef Ramay in philosophical discussions when not dozing or pounding the pavement with Husain in search of cups of tea and paan. After palling around, Husain would drop Kazmi near Tollington Market late at night before repairing to his own Old Anarkali home.

There is sadness in Husain—sadness that comes from prescience about the futility of the revolutionary fervor of the literary man or adeeb who abandons his world of imagination for politics. Husain calls it “chautha khoont,” the delimitation of the province of creativity beyond which the adeeb demeans himself and his trade. On the pavement outside the YMCA rested the reputations and failed genius of many literary types who ventured out of their inner world and tried to impose their defective understanding of the outer world on others.

Husain’s life, or the little that he allowed to escape from his inner fastness of memory and words, was spent walking the streets of Lahore with variable and varied companions. That’s what he has written about in his memoir, the relationships he formed in the teahouses of Lahore. Those who think he has left out his private life will have to be told that he had no other life, or that he never discovered the method of writing about it. His memoir mentions his sister’s sons just twice, in passing. His nephew Hassan Zaheer, a brilliant civil servant who would be taken POW by India, wrote two books that changed Pakistan’s history. He arouses no response in Husain because perhaps he never came to the teahouses where Husain lived.

All literature after all is words. Husain wrote them carefully and guarded them against Lahore’s contamination. His Dibai speech, sealed against miles and miles of dull prose surrounding his journalistic career, is powerfully evocative. There is no one who writes like him. All revolutions came to grief at the end of the last century, but Intizar survives them, and not without a touch of sadness about what to him was always predictable.

Intizar Hussain to me is a recluse to invariable rises to every occasion. He says what he feels with simple clarity and leaves it to find its mark. Behind the soft-spoken politeness is a razor-sharp observation delivered in brief sentences. He does not intend sting, but the honesty of his comments invariable find a home.