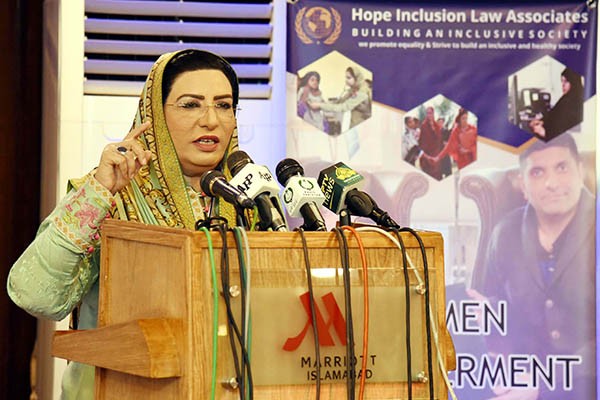 Special Assistant to the P.M. on Information claims offensive slogans creating hurdles to empowerment of women

While a peaceful protest is the right of every citizen, some slogans attached to the Aurat March 2020 are against the teachings of Islam and run counter to the socio-cultural values of Pakistani society, Special Assistant to the P.M. on Information Firdous Ashiq Awan said on Friday.

Addressing a function ahead of International Women’s Day, which coincides with the Aurat March on March 8, Awan claimed a “handful of elements” were trying to mislead the entire nation through slogans that were “repugnant to religious beliefs.” In Islamic society, she added, men as fathers, brothers, husbands and sons respect and protect the honor and dignity of women. She claimed that slogans targeting men were creating hurdles to the emancipation and empowerment of women instead of promoting their just cause.

The de facto information minister claimed the incumbent Pakistan Tehreek-e-Insaf-led government, under the guidance of Prime Minister Imran Khan, was committed to empowering women under the teachings of Islam. No state could progress unless its women actively participate in the nation-building process, she said. For the PTI, every day is Women’s Day, she said, and it was striving to empower them in every field of life.

Awan said Pakistan was established in the name of Islam and it fully protected the rights of women, adding that the prime minister’s dream of Riyasat-e-Madina could not materialize if half the country’s population were not empowered.

Referring to Fatima Jinnah, the special assistant to the P.M. said she had stood by Quaid-e-Azam Mohammad Ali Jinnah in the struggle for the creation of Pakistan and it was now the responsibility of today’s women to take a more pro-active role in the development of the country.

Awan admitted that there was great need for better gender balance in Pakistani society, including an end to discrimination against women and male dominance. There should be a change in the societal attitude toward professional women, she added.

Meanwhile, the opposition Pakistan Muslim League (Nawaz) said it supported the Aurat March 2020 but urged the marchers to adhere to “Islamic and cultural” norms of the country. This prompted the Pakistan Peoples Party, which has expressed full support for the march, to allege that the PTI and PMLN had formed an unofficial “anti-women” alliance. Rightwing parties such as the Jamaat-e-Islami have separately condemned the Aurat March for “vulgar” slogans and placards.